John Nelson (born 10 January 1886) was the son of Richard and Sarah Nelson, née Edwards. Richard was born at Melling, Lancashire and Sarah at Farnham, Surrey. In 1881 Sarah's mother, Martha Edwards, a widow, (born at Mold, Flintshire, c 1802) was living with Sarah and Richard at Steeton, Yorkshire.

The British Army Service Record for John Nelson exists but may be incomplete. 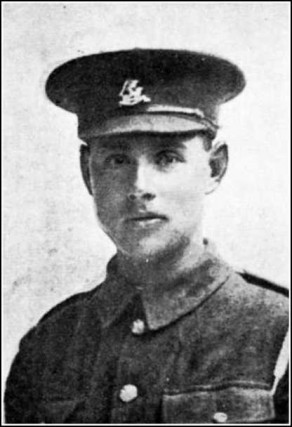 The sad news that Private John Nelson of the Duke of Wellington’s had been killed on the Western Front was received by his sister, Miss Nelson, on Monday morning. Second-Lieut. Reece, who wrote to Miss Nelson, expressed his deepest sympathy in reporting the death of her brother, and stated that Pte. Nelson was killed by a portion of shell which struck him in the middle of the back on August 29th, and that although he had only been in the platoon a short time, he had proved himself an efficient soldier. Deceased was Steeton’s eighteenth soldier to fall for his country. He enlisted early last March and had only been in France three days short of a month. Previous to joining the Army he was in the employ of Messrs. John Dixon & Sons, and was the youngest son of Mr. Richard Nelson and the late Mrs. Nelson, of Low Fold, Steeton.

News was received on Monday morning by Miss Isabella Nelson, Low Fold, Steeton, that her brother, Private John Nelson, West Riding Regiment, had been killed in action in France. The sad news was conveyed in a letter from Second Lieut. Reece, who said it was with the deepest sympathy that he had to report the death of her brother, who was killed on the 29th of August by being hit with a piece of shell in the middle of the back, death being practically instantaneous. Although he had only been with his platoon a fortnight, he had proved himself an efficient soldier and a willing worker, and was always bright and cheerful. Pte. Nelson, who was 29 years of age, was the son of Mr. and Mrs. Richard Nelson of Low Fold, Steeton. He enlisted last March and had been in France three days short of a month when he met his death. Prior to enlisting he was employed at Messrs. John Dixon and Sons. He was formerly a playing member of the Steeton Rugby and Association Football teams. This makes the 18th Steeton soldier to have met his death during the war.