John, who had been mortally wounded in a raid on German trenches, was buried by the Germans in Achiet-le-Petit Communal Cemetery. A cross had been erected by them and a bottle containing a Burial Certificate placed in the grave. His body was exhumed and re-buried after the war. 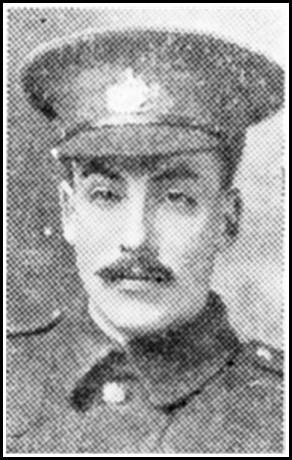 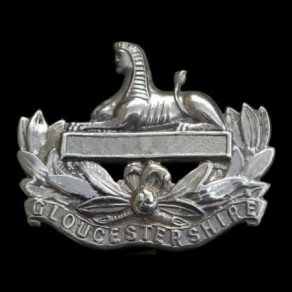 Before the bombing raid described below, the diaries of the 1/6th Gloucesters from October to the end of the year contain nothing worth recording, for each ‘diary’ consisted of one sheet of paper only–one for each month–with barely sufficient writing on it to constitute a short letter: moves up and from the trenches at Gommecourt and Hébuterne, and billets in Couin. But both the diaries of 144th Brigade Headquarters and the Battalion contain as appendices a full account of the raid, though for some reason unknown the former deletes the name of every officer.

The Battalion Diary calls it an ‘Enterprise by C Company, 6th Battalion, Gloucestershire Regiment on the night of the 25th/26th November, 1915.

The intention was to raid the German trenches and shelters at the south-eastern corner of Gommecourt Wood, for the purpose of obtaining prisoners and information as to the trenches, garrisons, etc. Strong works were known to exist at this point.

The ‘scheme’ of the attack, because it was the first of its kind made by the 1/6th Battalion, is given in full:

‘Strength of party 5 officers, 100 other ranks; of these two parties of 25 each under an officer told off to enter trenches at X and Y on attached plan.1 Remaining three officers and fifty other ranks to be in support in Z hedge at W on plan.2 As soon as the two parties are in position 70 yards from the German trenches, “ready” to be signalled back to artillery who commence first barrage as shown on plan.3 The object of this barrage is to make the German sentries take cover, drown the noise of our party approaching and cutting the wire, and subsequently to prevent German reinforcements coming up from second line. The first gun to be the signal for the assaulting parties to rush. Bombing parties to be left at each communication trench, and the remainder of the two assaulting parties to work to the central part and then retire on to the support. The whole party then to retire to our trenches and second barrage to open to cover retirement.’

A preliminary bombardment was to take place during the afternoon of the 25th in order to cut the enemy’s wire, damage his trenches and attract a working party from whom prisoners might possibly be captured when the raid took place.

The support party at Z hedge was to consist of three officers, six grenadiers with rifle grenades, fifty men in fighting order with rifles, bayonets and reserve of bombs, one officer, R.F.A., with telephone and operator, three telephone operators for infantry with their instruments.

At 2.40 p.m. on the 25th the Divisional Artillery opened fire in order to cut the wire and damage the enemy’s trenches. When darkness had fallen Lieutenant H.P. Nott and twenty other ranks crept out to Z hedge in order to prevent German patrols occupying it. At 11.25 p.m. ninety men of C Company, including the two raiding parties under Captain Young, left the trenches and joined the party already at Z hedge. In bright moonlight, but moving very slowly for fear of attracting the Germans, the two parties under 2nd Lieutenants Pryce and Badgeley left the hedge and crossed to positions of readiness 70 yards from the German trenches. They were in position by 12.45 a.m. and at 12.58 a.m. Captain Young received a report from them by telephone that they were ready to assault. He waited two or three minutes until a cloud obscured the moon, and then asked the artillery officer with him to signal back for the barrage. The word ‘ready’ was ‘phoned to the Divisional gunners at 1.3 a.m. and with a crash the barrage fell all round the sector of the trenches to be raided.

The right party (under 2nd Lieutenant Pryce), whose point of entry was Y, found only low wire confronting them and they were able to enter the hostile trenches without alarming the enemy. The first shelter met with was a telephone office: a German coming up the steps met Lieutenant Pryce. The latter called on him to surrender. He refused and was shot. Three bombs were then thrown into the shelter. A block was then formed and an N.C.O. in charge of the blocking party pulled up a sump cover which effectively prevented the German supports from reaching the raiders. Led by their officers the latter then ran down the trench, bombing six more shelters in succession. Three unarmed Germans were taken during this rush down the trench. As they were being passed down for evacuation they suddenly darted into a shelter, re-appearing almost immediately armed, and attacked the raiders in the rear. The three were then killed. Lieutenant Pryce had now lost touch with the left party and began to retrace his steps up the trench, but found it full of hostile troops who had apparently come up from their underground passages. The raiders then bombed this crowd of Germans most successfully, climbed out of the trench and retired with all their wounded. The enemy tried to pursue them but were again driven back with bombs. Lieutenant Pryce had been slightly wounded by a pistol fired by a German officer, but he killed the latter with his revolver.

With the exception of one man who had been sent back with a message to the signallers and was never seen again, the right party reach Z hedge safely, bringing back one wounded German with them.

The left party, however, under 2nd Lieutenant Badgeley, were not quite as lucky. When they reached the German wire they found it had not been cut by the artillery. They had to cut their way through two belts of wire, the second being very new, thick and strong wire 5 yards deep–no easy task. The unavoidable noise caused by the wire-cutters gave the German sentries the alarm. Nevertheless, Lieutenant Badgeley and ten men managed to get into the trench, where they bombed the first dugout, the officer having shot down two Germans. The enemy then retired along the trench to the left. From the parallel trench in rear bombs were thrown at the raiders: they were replied to with interest! Touch was gained with the right party, but Lieutenant Badgeley was wounded by a bomb which fell and exploded at his feet. The party then retired to Z hedge, bringing back all their wounded. One of the latter was unfortunately killed by a chance bullet on the way back.

Having now concentrated the raiders at Z hedge, Captain Young telephoned to the artillery to stop the first barrage. He then sent the men, in small parties, back to the trenches. Lieutenant D.H. Hartog, with the rifle-grenade party, moved off to the left, where he was able to enfilade the enemy’s trench, which by now was presumably crowded. He fired twelve grenades into the trench and then withdrew.

The raid was most successful and many Germans must have been killed, for they were caught crowded together in big, deep shelters which were heavily bombed. The prisoners stated that the trench garrison was a company numbering 180 men. Eight Germans had been killed in the trench outside these shelters.

The raiders’ casualties were 1 man killed, 1 man missing and 2nd Lieutenants Badgeley and Pryce and 18 other ranks wounded–all slight wounds.

Both the Corps and Divisional Commanders and G.H.Q. heartily congratulated the Battalion on this successful enterprise.

1 X and Y were two points at the south-eastern corner of the Wood.

2 Between our lines and the enemy’s trenches was a hedge known as Z Hedge. At point W the hedge formed a semicircle, the right resting on the Hébuterne–Gommecourt road, which crossed No-Man’s Land in a north-east to south-west direction.

3 The first barrage was to fall round the German trenches on the south-eastern corner of the Wood (not on the front line) so as to prevent reinforcements from arriving, or hostile troops in the front line retiring.

[L/Corporal John William Kilburn who died of wounds on the 26 November 1915, was buried by the Germans. John would be the missing soldier referred to above.]

DEATH OF INGLETON’S OLDEST INHABITANT – By the death of Mrs. Sarah Kilburn, of High Street, Ingleton, has lost its oldest inhabitant. Mrs. Kilburn, who was known as ‘Ingleton’s grand old lady,’ was 84 years of age, and up to two years ago was in excellent health and in possession of all her faculties. For the past two years, however, she had been confined to her bed, but beyond her inability to get about was fairly healthy. She passed away quietly on Tuesday evening. The deceased was predeceased by her husband 18 years ago, he dying at the age of 83 years. Mr. Kilburn was one of the old fashioned schoolmasters and acted in that capacity for 35 years at Chapel-le-dale. He and his wife were also for many years the respected host and hostess at the Station Hotel, Ribblehead, where they also kept a general store and sub-post office. It is some 23 years since they came to reside in Ingleton, during that time the deceased lady took a very active part in parochial work. She was a member of the Ingleton Mothers’ Union and worked most assiduously for the Ingleton Literary Institute to clear off the debt owing on that useful building. She was a most ardent church woman and was always first and foremost to assist in any good work in the place. She leaves five married children. Four of the deceased’s grandsons have been killed in the war, and six are still on active service.