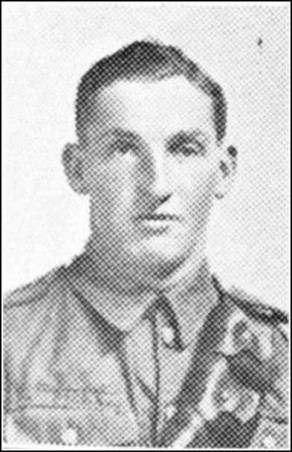 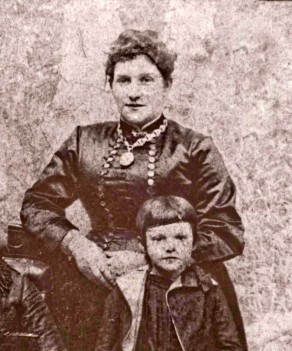 Emma Teal, the mother of Gunner John William Wilson, with her daughter

Two well-known Steeton soldiers and sportsmen in Pte. George Emmott, Liverpool Regt., and Gunner J. W. Wilson, R.F.A., have been respectively wounded in the leg and gassed in France. Gunner Wilson joined with the late Gunner W. Rishworth in January 1915, and both went to France the same year with the same division and were at home on leave together last May, after 20 months’ service in France. Both the above named soldiers, Emmott and Wilson, were in the pre-war days prominent players with the Steeton cricket team, and football team also during its existence. The last named is in hospital near Oldham, Lancashire.

Mr. and Mrs. Harry Green, Skipton Road, Steeton, on Sunday morning last had a letter from a sergeant stating that their son, Gunner John William Wilson, R.F.A., had been killed at his post, a shell bursting in the gunpit on April 29th. He was an old St. Stephen’s scholar and a former member of the local Church Lads Brigade and was actively connected with both the local cricket and football teams. Of a kindly and cheerful nature he was popular amongst his many associates. Joining up along with the late Gunner W. Rishworth in January, 1915, he is, like his much regretted comrade, “sleeping his last sleep” somewhere in France. Going to France in July 1915, the fallen soldier was gassed last autumn and was home on leave a few weeks ago and had only been back on the Western Front a month. In his 27th year he was formerly in the employ of John Dixon and Sons, and was the second son of the late Mr. Isaac Wilson and a member of an old Steeton family.

News has also been received that Pte. John Wm. Wilson, R.F.A., Skipton Road, has been gassed, and is in Woodfield Hospital, near Oldham.

Mr. and Mrs. Thomas Barrett, Elmsley Street, Steeton, received official word on Saturday morning that their son, Pte. John Hartley Barrett, West Riding Regiment, had been killed in action on April 13th. Pte. Barrett, who was 29 years of age, joined the army in March, 1916, and was drafted out to France in June, 1916. He was well-known in local football circles, being a playing member of the Steeton Association football team. Previous to joining the army he was employed as a wool-sorter by Messrs. John Clough and Sons.

Official word was received on Sunday morning of the death of another well-known Steeton young man, Gunner John William Wilson, son of the late Mr. Isaac Wilson, and Mrs. H. Green, Skipton Road, Steeton. Gunner Wilson, who was 26 years of age, joined the army in January, 1915, and went out to France in July, 1915. He only went out to France again about seven weeks ago alter undergoing treatment for gas poisoning. He was well-known in local cricket and football circles, being a playing member of the Steeton first cricket eleven, and of the Steeton Association football team. Previous to joining the army he was employed an a turner by Messrs. John Dixon and Sons.

Mr. and Mrs. William Shackleton, Elmsley Street, Steeton, received word on Tuesday morning of the death of their son in France, Corpl. Henry Shackleton, Lewis Machine Gun Section, West Riding Regiment. The sad news was conveyed in a letter from a private who was with him, in which he stated they were digging themselves in when a shall hit him on the head and killed him. Corps. Shackleton, who is 19 years of age this month, joined the army in June, 1917, and went out to France in March, 1918. He was actively connected with St. Stephen’s Sunday-school, and was a member of the Church Lads Brigade. Previous to joining the army he was employed by Messrs. John Clough and Sons.