Joseph Bell was the son of Samuel Irving and Jane Ellen Bell, née Maudsley. Samuel was born at Fell Edge, Crosthwaite, Westmorland and Jane at Brogden near Barnoldswick, Yorkshire. Jane died in 1898. Joseph was the cousin of Private Robert Thomas Maudsley (137) (q.v.).

Joseph died between the 14 and 16 August 1916. The exact date is not known; this is perhaps because there were no witnesses to his death who survived the fighting at Pozières, or if any, uncertain as to the date. 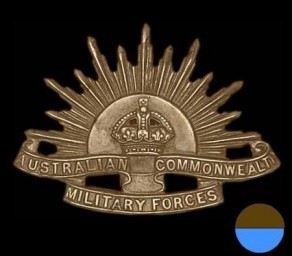 News has reached Grindleton that Private Joseph Bell has been killed in action. Private Bell, who is a nephew of Mr. John Maudsley, fruit dealer, Grindleton, was brought up by his uncle and aunt, Mr. Edgar and Miss Maudsley, both his parents being dead. Some four years ago he emigrated to Australia, and returned with a contingent from the Commonwealth early in the war, and went to France with them. He was well known at Grindleton and his demise is much regretted.

As reported last week, Private Joseph Bell, of the Australian Expeditionary Force, eldest son of Mr. Sam. Bell, Sabden, has made the great sacrifice. Private Bell, who was 26 years of age, formerly resided in the village and was a scholar at the Council school. He left Sabden to go to Grindleton, but five years ago emigrated to Australia, and when he heard his country's call joined the Anzacs. News of his death has been received by his uncle, Mr. John Maudsley, of Grindleton. His youngest brother, Driver George Bell, of the R.F.A. enlisted two years ago at the age of 15, and has been in Mesopotamia for 18 months.

News has reached Sabden that Pte. Joseph Bell, of the Australian Expeditionary Force, has been killed in action in France. He was the eldest son of Mr. Sam Bell. Pte. Bell went to Grindleton from Sabden, and about five years ago left for Australia. When the war broke out he joined the Australian Expeditionary Force. He was 28 years of age, and has two other brothers serving their country. One is in Mesopotamia, and the other in France. The younger brother, before enlisting, was an apprentice to Councillor Hargreaves, painter and decorator, of Sabden. Pte. Bell was a former scholar at the Council School.

JOSEPH BELL, son of Samuel Irving and Jane Ellen nee Maudsley married 1889 All Saints, Pendleton was born and went to school in Sabden, moving to Grindleton to live with his Maudsley aunt and uncle. In 1911 he emigrated to Australia living in the town of Geraldton. There is a war memorial to the memory of WW1 (and other conflicts) in the town although there are no names upon it. Joseph probably died at the battle for Mouquet Farm, near the ruins of Pozieres. His cousin, Robert Thomas Maudsley, also fell in action.