Joseph Jackson was the son of Henry and Kathleen Jackson, née Speakman. Henry was born at Harrop near Grindleton and Kathleen at Waddington, Yorkshire. 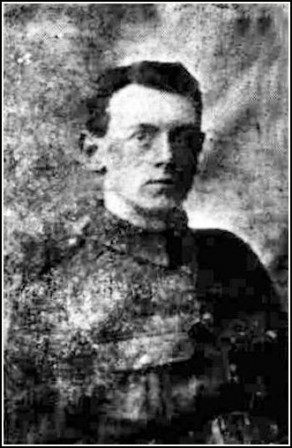 Private Joseph Jackson, of Waddington, in the course of a letter home, states:– “I am in the best of health, and enjoying myself in France. I have been in the trenches once, and came out all right. I am now learning bomb throwing, while ------ is still in the trenches. As we lie in bed we can hear the guns quite plainly, but we have got quite used to it now, and the sound no longer keeps us awake. It is a sight to see the ruin and the damage done by the shells. I saw the other day a house blown to pieces by shell fire while not ten yards away a Crucifix was left standing unharmed.

There was consternation in Waddington on Monday at a report circulated that Private J. Jackson, of Chapel House, had been killed. The letter conveying the news was received in Clitheroe but the arrival of a letter from Private Jackson, written at the same or a subsequent date, went to show that the report was incorrect. Enquiries at Preston, revealed the fact that Private Jackson’s name was not in the list of casualties received there. Private Jackson wrote:–

“You will think I have been a long time in writing but we have had a very rough time for about a week. I have just come safely through a charge. It was awful, shells bursting right and left, knocking the trench to atoms, but we gave them more than they gave us. It was awful waiting and being shelled and not being able to hit back, but when the order came to charge we were off as hard as we could at the Germans, but they are brave fighters for all their tricks. We had very little loss and we won as you will no doubt see in the papers. I can’t tell you where we are but if you look in the papers for the charge you will have an idea.”

Private Joseph Jackson, of the East Lancashire Regiment, a well known Waddington soldier, has been awarded the Military Medal for carrying despatches under heavy fire. He is 20 years of age and had been in France 18 months.

Mr. and Mrs. Jackson, Chapel House, Waddington, were notified last Friday, that their eldest son, Joseph, a private in the 2nd East Lancashire Regiment, had been killed in action. The melancholy information was contained in a letter which a relative received from Corporal W. Irwin, one of the deceased’s comrades, who states:

“Private Jackson, myself, and some other men volunteered to go out and try to capture a German trench on the night of the 14th inst. As we were crossing No Man’s Land the enemy spotted us and opened fire. Private Jackson was wounded in the stomach, just above the left groin. The sergeant and I stopped with him an hour and a half before we could get him back to the trench, and he died on arrival at the advanced dressing station. I am awfully sorry we have lost him, as he was a very good lad. I and the sergeant have been recommended for bringing him in under heavy fire. All the members of the platoon desire to express sympathy with the parents.”

It was only in December that Private Jackson was awarded the Military Medal for carrying despatches under heavy fire, being the first Waddington soldier to receive decoration, and when, a week later, he arrived home on a short furlough, he was given an enthusiastic reception. He would have attained his majority on Tuesday of this week, and had been in France nearly two years. Sympathy goes out to Mr. and Mrs. Jackson in their great affliction. A memorial service will be held in the Wesleyan Church, Waddington, on Sunday afternoon next, at 2 o’clock, conducted by the Rev. F.J. Howden.

The parents of Joseph Jackson, of Waddington, whose death was notified by his Corporal, are in great suspense, occasioned by a notice from the War Office last Friday afternoon, to the effect that Private Jackson had been wounded and removed to a hospital. A telegram was dispatched to the Officer Commanding the East Lancashire Regiment in France the same night asking for confirmation or otherwise, but no reply had been received up to the time of going to press. Arrangements had been made for a memorial service to be held in the Waddington Wesleyan Church on Sunday afternoon, but this was abandoned, the service being turned into one of intercession.

All doubts as to the fate of Private Jos. Jackson, of Waddington, who was reported by a comrade to have been killed several weeks ago, have been set at rest by the receipt of an official notification of his death.