Michael Harold Webster (born 15 December 1893) was the son of Richard and Mary Ann Webster, née Willis and brother of Bombardier Willis Webster (795547) (q.v.) Their father was born at Walden in the parish of Aysgarth and Mother at Thoralby, Yorkshire.

SEC.-LIEUT. MICHAEL HAROLD WEBSTER, West Yorkshire Regiment, killed in action on July 1, was the eldest son of Mr. and Mrs. R. Webster, of The Hollies, Tong Road, Armley, Leeds. He was educated at the West Leeds High School, and took his B.A. degree at the Leeds University, joining the O.T.C. there. He enlisted as a private in the Highland Light Infantry on June 14, 1915, and served with that regiment in France about five months, when he received a commission. He returned to the Front on June 15 last, being posted to the West Yorks. Regiment. He was 22 years of age. His only brother, Willie Webster, is serving with the R.F.A. 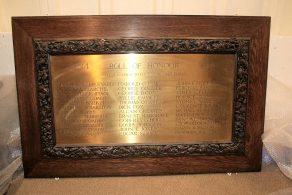