Robert Carter (born 5 July 1897) was the son of Thomas and Elizabeth Carter, née Nicholson. Thomas was born at Kirkdale and Elizabeth at Liverpool, Lancashire.

Robert was killed in action during an attack on Boom Ravine, near Grandcourt, Somme. 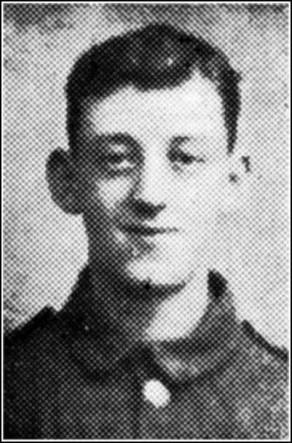 Low Bentham has responded to the Country's call for men better than the majority of the villages in the district. The framed Roll of Honour at the Bentham Parish Church now contains 65 names, and the following have still to be added:-Mr. Edw. Downham, Mr. Tom Carter, Mr. Robert Carter, Mr. Albert Townley, Mr. Percy Prince and Mr. Albert Brayshaw, making a total of 71, while no fewer than seven of the village young men have been rejected. Two of the village lads, namely Private James W. Bell and Private David Nelson, have been killed in action, and three have been discharged through being unfit for further service.

Amongst the families who are doing their bit is that of the late Mr. Thos. Carter and Mrs. Carter, of Oysterber House, Low Bentham, who are represented by their following four sons:-Pte. John Carter, the eldest son, joined the R.A.M.C. at Leeds on March 13th this year. He was a silk dresser at the Silk Mill, Low Bentham, he having worked there for nearly fourteen years.

Sergeant James Carter, of the 2nd British Columbia Regiment, is the second son. He emigrated in March, 1912, to Arrow Lakes, British Columbia, and on the day that war was declared he enlisted at Victoria, in British Columbia, and after being in training for a few months he came over to England with a contingent, arriving here about the middle of last March. After being stationed at Shorncliffe Camp, near Folkestone, a short time he went out to France with his Company, and about the latter end of May he was wounded. After being invalided home, he returned to Shorncliffe Camp, where he was transferred into the clerical department, and afterwards promoted from the rank of a private to a sergeant.

Pte. Tom Carter and Private Robert Carter, the third and youngest son respectively, both joined the Royal Fusiliers at Lancaster last Saturday, and they left Low Bentham on Wednesday, along with Mr. Albert Townley.

Last week-end four more Low Bentham young men enlisted at Lancaster in the Royal Fusiliers, they being:-Mr. Tom Carter, third son of the late Mr. Thos. Carter, and Mrs. Carter, of Oysterber House, Low Bentham, who has recently been in farm service; Mr. Robert Carter, youngest son of Mrs. Carter of Oysterber House, Low Bentham, a silk dresser, at the Silk Mill, Low Bentham, where he has worked for just over five years; Mr. Percy Prince, only son of Mr. and Mrs. John Prince, of Highfield Terrace, Low Bentham; Mr. Albert Brayshaw, youngest son of Mr. Jas. Brayshaw, and the late Mrs. Brayshaw, of Burton-in-Lonsdale. The two last young men mentioned both served their apprenticeship to painting and plumbing with Mr. Wm. Holmes, of Bentham, by whom they were employed prior to enlisting.

We regret to announce that Pte. Robert Carter, Royal Fusiliers, youngest son of Mrs. Thomas Carter, of Oysterber Cottage, was killed in action on Sunday, 18th February. Deceased, who was only nineteen years of age, enlisted at Lancaster in November 1915, and had been out at the Front eleven months. On Saturday last a field-card was received from him, stating he was quite well. The following extract was sent to his sister on Tuesday morning:

"Just a few lines to let you know about your brother, Robert. He fell by my side whilst in action, two days ago, shot through the head but did not suffer any pain. He must have been killed instantaneously as he did not murmur after he fell. He died a young hero, and we all are very sorry to lose such a good fellow. I was unable to get any of his things from him, as the Germans were counter attacking us and I had to leave him. We received a parcel for him yesterday and we divided it amongst his chums. This is all the information I can give you at present."

The news was received from one of his pals, Pte. H. Tomlins. Much sympathy is extended to Mrs. Carter, who has three sons now serving their King and Country - Pte. John Carter, R.A.M.C. now in France, Sergeant James Carter, Canadians, wounded in France in May 1915, and Corp. Thomas Carter, Royal Fusiliers, wounded in October 1916.

Pte. John Dowbiggin, who was badly wounded on September 7th last, is on sick leave from the military hospital at the Isle of Wight, for ten days. His brother was reported missing on the 7th inst., and has not been heard of since. He was in the Royal Fusiliers, and a pal of Pte. Robert Carter, who was reported killed two weeks ago...

A service was held at Low Bentham Parish Church on Sunday evening last in memory of Pte. R. Carter, who was killed in action in France last week. The rector (Rev. Percy Coates) was the preacher.

Pte. John Dowbiggin, who was badly wounded on Sept. 7th last, is on sick leave from the military hospital at the Isle of Wight. His brother was reported missing on October 7th and has not been heard of since. He was in the Royal Fusiliers, and was a pal of Pte. Robert Carter, who was reported killed two weeks ago.