Robert Torrance was the son of John and Margaret Torrance, née Bennie. John was born at Strathaven, Lanarkshire and Margaret at Denny, Stirlingshire.

Robert played for Bradford City in the replay of the 1911 F.A. Cup Final against Newcastle United at Old Trafford that Bradford City won 1-0 and was 'man of the match'.

Robert was married to Mary Smith, the daughter of Thomas and Rebecca Smith, at Bradford Parish Church (later to become Bradford Cathedral) in 1915.

Robert is commemorated in the 'City of Bradford Great War 1914-1918 Roll of Honour' and on the Kirkintilloch War Memorial.

There have been jubilations in Bradford, because the City team have taken the new English Cup back to the neighbourhood where it was made. More junketings and high jinks, as the American humourist said, are to follow.

Some of the hypercritical suggest that Bradford City were extremely fortunate to gain the most coveted and the most cherished honour of the game. We do not see their luck in losing the toss both at the Crystal Palace and Manchester, and keeping Newcastle United at bay for three weary hours in the face of a howling gale. The United took TEN corner-kicks in the first half of the game at Manchester, and yet not a shot pierced the netted haven. On the other hand, Speirs headed a goal when the wind was more than a twelfth man for the Novocastrians.

Bradford City played the more effectively, and consequently thoroughly deserved their triumph. Let the credit be given where it is due, for in seven matches their defence was only once beaten, and that by Norwich City, while they scored as many goals as suited their purpose. As a rule Final Ties in these days do not produce games of high class calibre, but that of Wednesday was quite up to the average of the last decade. We congratulate such a new club as Bradford City on their achievement against an eleven of great expectations.

Bradford City, who preserved their policy a profound secret, changed their team at the last moment, Torrance superseding Gildea (late of Falkirk) as the centre half-back. Torrance has that hair of vivid hue which is supposed to be associated with pluck and daring deeds. He was introduced to play the part of Paul Pry. Often he intercepted, and entirely brought to naught the best laid schemes of the thrusting Tynesiders.

Robert Torrance has been likened to the fiery cross, not unknown in the mountain districts of his native land. The simile should appeal to Newcastle United. If Torrance has one feature which distinguishes him more than another it is that he is a stranger to fear. This quality, combined with his speed, and some slight previous experience in the middle line, marked him out as the man for the moment. The mission was committed to his care, and as a spoiler he made a reputation for himself. He had much to do with Bradford City taking the Cup into the West Riding for the first time in the history of Association football.

Torrance has been somewhat of a general utility player for Bradford City. He learnt his football first with Kirkintilloch United, then with Kirkintilloch Harp, and in the summer of 1907, he went to Bradford City as a right-back. After playing some time with the reserves he was drafted into the first team early in the season of 1908-9, when City had secured promotion to the First Division. But then Chaplin arrived on the scene, and Torrance went into reserve again.

In March, 1910, when Whittingham failed to turn up for the match against Sheffield Wednesday, Torrance appeared with no small credit to himself as inside-right, but sustained an injury while doing so. At the opening of the present season, when the problem of centre-half back was causing trouble and anxiety, Torrance was again transplanted, and in September he operated in that position against Sheffield United and Aston Villa.

Then the directors found Taylor, and Torrance once again became reserve back, as he thought that centre-half back entailed too much work! He is a well-built player of 22 years, standing 5ft. 8in., and weighing 11st. 7lb. He is a very useful man to have about the house. 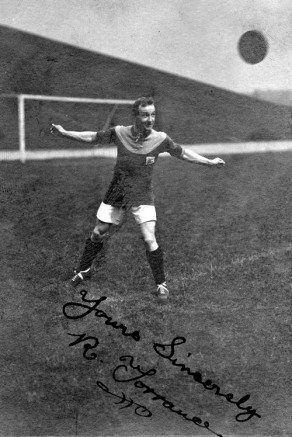 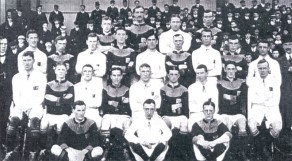 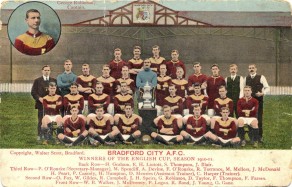 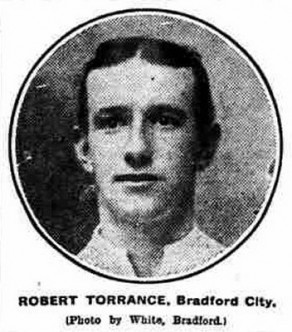 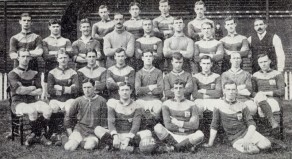 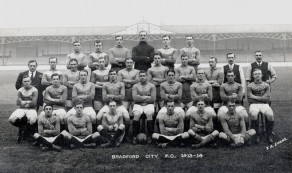 Entry for the marriage of Robert Torrance and Mary Smith, 29 December 1915 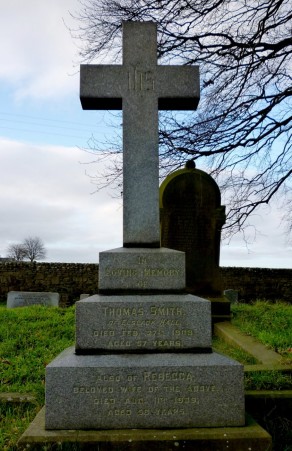 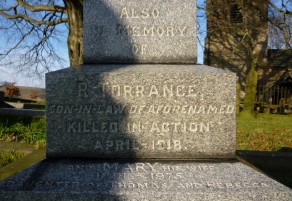 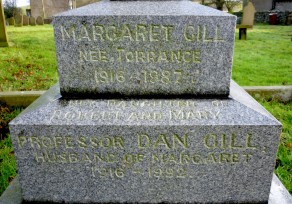 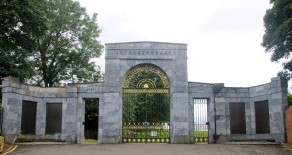 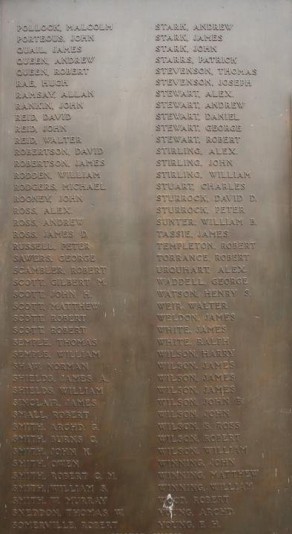