Robert Walker Earnshaw (born 13 April 1887) was the son of William and Elizabeth Earnshaw, née Smith. William was born at Ashton-under-Lyne, Lancashire and Elizabeth at Embsay, Yorkshire.

Robert was married to Dorothy Addison Taylor in 1915.

The British Army Service Record for Robert Walker Earnshaw exists but may be incomplete. 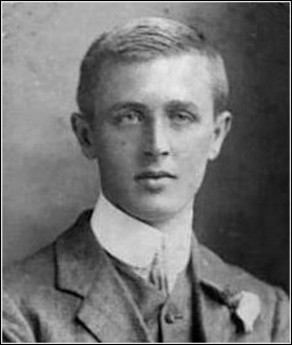 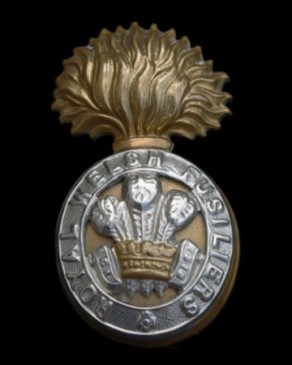 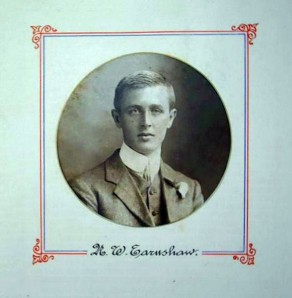 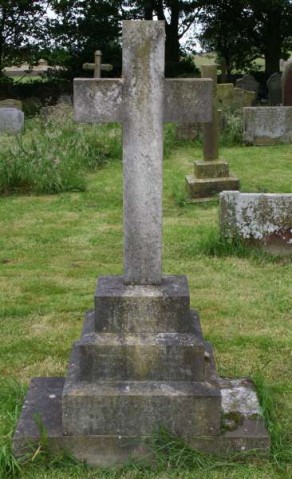 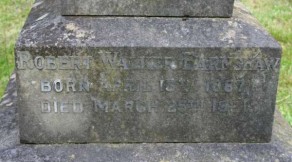 An Alleged Impudent Fraud–Robert Wm. Earnshaw, an assistant schoolmaster, formerly of Embsay, and well known in the district, was charged with obtaining £2 by false pretences from the landlord of the Swan Hotel, Gargrave.

Supt. Vaughan said the prisoner called at the Swan Hotel, Gargrave, in the first week in November and had supper, leaving in a motor car, stating that he was going to Settle. A few days later he called again, ordering supper for eleven o’clock that night, and also ordered luncheon for himself and two ladies for Saturday morning. He ordered breakfast for himself and two officers for last Monday morning, stating he was a lieutenant from the Drill Hall at Keighley, and had been speaking at a recruiting meeting at Kirkby Lonsdale. He also said he would return for supper. He asked the landlord for the loan of £2, saying he was short of cash through recruiting, and would pay him back on Saturday when he came. The landlord lent him the money, thinking his statement was correct. As a matter of fact he had nothing to do with recruiting, and did not belong to any regiment. Last Thursday, however, he enlisted at Leeds as a private in the Welsh Fusiliers and was sent to join the regiment at Rhyll, North Wales, where he was apprehended on Monday night. Supt. Vaughan asked for a remand until Saturday, adding that further charges would probably be preferred against him.

P.C. Maddox gave evidence of arrest. When charged Earnshaw made no reply.

Prisoner was remanded in custody until Saturday

OFF TO THE FRONT – CHARGES WITHDRAWN

Mr. Banks Newell of Bradford, on behalf of the defendant, said there was no need to go into the facts of the case, as it was clearly a misunderstanding. The accused was going to do what some were too old to do, and some would not because they were cowards – his only wish was to defend his country. There was no justification for the charge at all, and all were willing to withdraw their allegations against this young man, who was going to the front very shortly and whose anxiety was that he was wanting to get there sooner than they would let him go.

The Chairman: Your suggestion is that the matter should be adjourned sine die.

Mr. Newell: I should certainly request you to dismiss the charge. The only point is that the man is going to serve his country as an officer and that it would not be proper that he should have a charge hanging over his head.

The Chairman: There is a charge, but it is not likely to be raked up again.

Mr. Newell: Everyone is willing to withdraw the charge and everyone is convinced that there was nothing in it.

The Chairman: I don’t see how we can dismiss a case without hearing it.

Mr. Newell: If there is no evidence offered?

The Chairman: I think it best to adjourn the case for a fortnight until the Clerk has communicated with the Public Prosecutor, and when he receives his reply the Bench will probably act as you suggest.

A further charge made against Earnshaw by Charles Mawson, garage proprietor, of Skipton, was not mentioned, and the Bench adjourned the first case for a fortnight, the Clerk in the meantime to communicate with the Public Prosecutor.

A wedding was solemnized at the Crosscrake Church [Westmorland] on Tuesday week between Mr. Robert W. Earnshaw (at present serving with the Royal Welsh Fusiliers), formerly senior and modern language master at Tollington Park College, London, and Miss Dorothy Addison Taylor, only daughter of Mr. and Mrs. Thomas Taylor, of Laneside, Stainton. The bride, who was attired in navy costume, with hat of white felt, carrying a beautiful bouquet of white lilies and roses, was given away by her father, the bridesmaids being Miss Earnshaw (sister of the bridegroom) and Miss Edith Duff (cousin of the bride), both wearing grey dresses. Mr. James W. Earnshaw, the bridegroom’s brother, acted as best man. Mr. H. Webster presided at the organ, and the choir gave a beautiful rendering of the hymns ‘How welcome was the call’ and ‘O perfect love.’ The officiating minister was the Rev. R.J. Dickson, vicar of Crosscrake. As the bridal party left the church Mr. Webster played the ‘Wedding March.’ A reception was afterwards held at Laneside.

The death occurred on Good Friday, after a long and painful illness, of Mr. Robert Earnshaw, who resided with his parents at the School House. Mr. Earnshaw’s illness was the result of a long period of military service. Joining the Royal Welsh Fusiliers in 1914, he was severely wounded in the jaw at Mametz Wood, suffering from gas poisoning, and later from severe injuries to his thigh as a result of being buried by the explosion of a shell. Although from that time his health declined, he saw further service in Ireland, and was again in the firing line with the South Wales Borderers at the conclusion of hostilities in November, 1918. A school teacher by profession, Mr. Earnshaw was an ‘Old Boy’ of Ermysted’s Grammar School, Skipton, of which he was head boy and captain in 1914-5. He leaves a widow and one child. The interment took place at St. Mary’s Parish Church on Tuesday. A service was held at the Church and the organist, Mr. J. Corns, played the Dead March in ‘Saul.’

A SCHOOLMASTER WHO WISHES TO GO TO THE FRONT

Robert Wm. Earnshaw, a schoolmaster, of Embsay, was charged with obtaining £2 by false pretences from Wm. Hy. Hodgson, of Gargrave.

Mr. Harold Newell, a barrister, of Leeds, who appeared for the defence, said there was no need to go into the facts of the case. There was no justification in the charge at all, and everyone was willing to withdraw it. His client’s only wish was to defend his country, and he would be going to the front very shortly.

The Chaiman: I understand this man has enlisted? – Yes, some time ago. The only anxiety is that he wants to get to the front sooner than they will let him go.

The Chairman: You are suggesting that this matter should be adjourned? – I would certainly suggest you to dismiss the matter.

It will have to go before the Public Prosecutor.–The only point is that the man, who is going to serve his country as an officer, will have a charge against him. That would not be nice; it would interfere with his distinction.

Mr. Hodgson (the prosecutor): I do not wish to press the case.

Supt. Vaughan: I am willing for it to be dismissed, but I want to know about the costs.

Mr. Newell: Will my client be able to return to his regiment? – Yes.

Robt. W. Earnshaw, a schoolmaster, of Embsay, was charged with obtaining money by false pretences.

Mr. J.E. Newall, who represented the defendant, said the reason why his client was not present he thought the Bench would have gathered from the letter which they had received from him. He was with his regiment in Wales. He could be got to Skipton by next Saturday if their Worships thought he ought to be present.

The Chairman: I think it is necessary that he should come whatever course we are going to take. We adjourn the case for a week.

AN EMBSAY SCHOOLMASTER BEFORE THE BENCH – “SAILING RATHER NEAR THE WIND”

Robert W. Earnshaw, a schoolmaster, of Embsay, appeared before the Bench on a charge of obtaining money by false pretences.

It will be remembered that the three weeks ago the accused was brought before the magistrates, and on that occasion the case was adjourned for a fortnight so that it might be brought to the notice of the Public Prosecutor. The accused was allowed to go back to Wales to join his regiment, but he did not put in an appearance at the Court the previous Saturday. However, Mr. J.E. Newall, who appeared on his behalf, said he could be brought for that day (Saturday).

Addressing the accused the Chairman remarked: “There has been no evidence in this case against you, but the Bench are going to dismiss it. In doing so they wish, through me, to tell you they consider that you have been sailing rather near the wind. You are wearing the King’s uniform and that should suggest to you everything connected with chivalry and bravery. We hope you will remember that. We wish you good luck.”