Rowland Harper was the son of John and Mary Harper, née Handley and cousin of Private John Winn (30972) (q.v.). Both parents were born at Garsdale, Yorkshire. John was the son of Rowland and Ann Harper and Mary the daughter of John and Eleanor (Ellen) Handley. 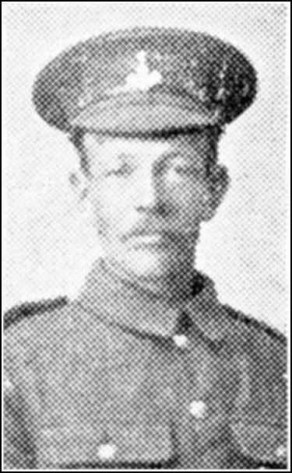 Thy voice is now silent, the hearth is now cold,
Where thy smile and thy welcome oft met us of old;
We miss thee and mourn thee in silence unseen,
And dwell in the memories of days that have been.

From his sorrowing mother, brothers and sister-in-law. Garsdale.

HARPER – In ever loving memory of Pte. Rowland Harper, of Roger Pot, Garsdale, who fell in action in France on June 7th, 1917.

Sleep on, dear Rowland, and take your rest;
Until the day breaks and the shadows flee away.

From his loving mother and family, Garsdale.

The photograph is that of Private Rowlnd Harper, 9th Yorkshire Regiment, son of Mr. And Mrs. M. Winn, West Hive Cottage, Garsdale, near Sedbergh, who was killed in action on June 17th, 1917, but whose death was not publically reported at the time. Formerly a farmer, deceased was living with Mr. Pratt, of Collier Holm, near Hawes, prior to enlisting in May, 1916. He went out to France in September, 1916. Of a quiet disposition, he was much respected in the district.