Samuel Higgins was the son of Samuel and Catherine Higgins (née - ). Samuel, senior, was born at Colne, Lancashire and Catherine at Bradford, Yorkshire.

HIGGINS, Samuel, aged 21, West Riding Regiment, son of Mr. and Mrs. S. Higgins, of 11, New Street, [Carleton], and before the war was employed at Carleton Mill, died from gas poisoning June 1915. He was wounded early in the war. 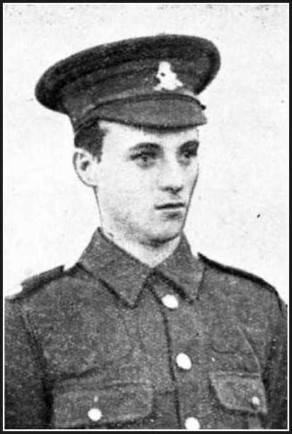 Pte. Sam Higgins, of the 2nd West Riding Regiment, returned to his home at Carleton on Saturday last after spending two or three weeks in hospital at Dublin nursing a wound received in France on October 22nd. His discharge from hospital was somewhat unexpected, and this, together with the fact that he arrived in the forenoon, when most of the bandsmen were at work, accounted for the absence of the welcome Carleton has hitherto given to those of her sons who have responded to their country's call. The greetings he has since received from his many friends in the village, however, have been of the heartiest possible character, and on Tuesday, his birthday, he was made the recipient of one or two useful presents.

Seen by a ‘Herald’ representative on Tuesday, Pte. Higgins had an interesting story to tell of his experiences in France. His memory for Continental place-names is not good, but this detracts little from his realistic tale of days spent in the trenches exposed to the deadly fire of the heavy German artillery. He missed Mons and the fighting which followed, but he has had a fair share of subsequent engagements.
He received his wound on October 22nd. On the 21st he was practically the whole of the day in the trenches, which he and his colleagues entered about three a.m. An ‘observer,’ from a point of vantage near by, informed them at dawn that they would be lucky to escape being blown out of the trenches before nightfall. Evidently he had spotted the German artillery, and the prospect was not encouraging.

A German Visiting Card
“They soon sent us a visiting card,” said Pte. Higgins, “which dropped very near our trench and buried us. We made the best of our way out, but when we had gone a few yards we heard another shell coming. Cover was hurriedly sought behind two haystacks. We had scarcely got there when the shell passed between the stacks, to which the subsequent explosion set fire. We remained there as long as we could, and later made our way to a neighbouring village where we met one of our officers and explained how we had been shelled out of the trenches. He put us in some other trenches in which we remained until late in the evening.

“Soon after breakfast next day,” proceeded Pte. Higgins, “a regiment of ours came through the village and announced that the Germans had broken their line at one point. We were immediately formed up and entrenched in a dyke side.” An incident typical of the British Tommy in the trenches was here related by Pte. Higgins. For a day or two previous to this he had suffered from toothache, and while in this trench a friend of his, despite the German fire, kept popping his head over a protection separating him from Pte. Higgins, and asking how his tooth was. He was not hit on the occasion, but has since met his death.

Lost His Colleagues and Met the French
From the trenches the West Ridings were removed to a farm house, which quickly became a target for the German artillery. One ‘Jack Johnson’ went clean through it and the troops had to clear out hurriedly. In the subsequent fighting Pte. Higgins lost his colleagues, but was fortunate in coming up with some French soldiers, with whom he fraternised and exchanged cigarettes. He had not been with them long before a shrapnel shell burst right in front of him and knocked him against the side of a house, a piece of shell entering his thigh.

“I picked myself up,” proceeded Pte. Higgins, “and tried to run to cover, but I found I was unable to go a stride, and was taken into a house near by, bandaged, and sent to the French headquarters.” Here he slept on three chairs until removed to a field hospital from which the occupants were shelled. This was a very trying experience indeed. Several shells burst in the vicinity, and shook the place, and the sufferers lying there expected one dropping on to the hospital every minute.

The place soon became too hot and Pte. Higgins was carried on a stretcher practically through the firing line to a place of safety. Eventually he was sent to a hospital at Bethune and here he had the satisfaction of seeing a German aeroplane brought down by French riflemen, though not until two bombs bad been dropped, both of which caused loss of life.

Pte. Higgins has a great respect for German artillery, which, he said, was doing all the damage. Their infantry was nothing great, but they had some marvellous snipers, who hid in trees and picked off anyone who exposed himself above the trenches. He had collected a few souvenirs, among them French and German bullets, and the plate of a German helmet, but these he lost with his kit.

He saw some sad sights in hospital. Perhaps the most pathetic case which came to is notice was that of a poor fellow who had been hit in the stomach with a piece of shrapnel shell, and who asked him for a cigarette less than half an hour before he died. Pte. Higgins arrived at Dublin on the 5th of November, and speaks very highly of the treatment he received both there and at the hospitals on the Continent. His wounded thigh is making satisfactory progress, but he still finds it difficult to got about and will be some time before fit for service again.

The following was received by Mr. Higgins, of New Street, Carleton, on Friday last from the War Office:–

“Sir – It is my painful duty to inform you that a report has this day been received from the War Office notifying the death of No. 10,141 Private S. Higgins, 2nd Battalion West Riding Regiment, which occurred at a place not stated on the 7th of May, 1915, and. I am to express to you the sympathy and regret of the Army Council at your loss. The cause of death was gas poisoning.”

Private Higgins, who was only 21, was sent abroad soon after the war commenced with the special reserves 2nd Battalion West Riding Regiment. He was wounded by shrapnel in October, being sent to the hospital in Dublin, returning home in December. He was again sent to the front early in the New Year. The deepest sympathy is felt in the village for the bereaved parents.

A younger brother, Private Allen Higgins, who is serving at the front with the Sixth Battalion West Riding Regiment, was reported missing, but anxiety was relieved on Saturday on the receipt of a letter from him.

Sleep on, dear son, as the days go by
No flowers can we lay on the grave where you lie,
For the dark waters of the ocean do keep us apart,
But your ever loving face will shine in our hearts.

From his Father and Mother, 11 New Street, Carleton.

HIGGINS – In loving memory of Private Samuel Higgins, Duke of Wellington’s, who died from gas poison on the 7th of May, 1915.

His King and Country called,
The call was not in vain,
And on England’s roll of honour
You will find our hero’s name. R.I.P.

From his Brothers and Sisters and Allan, somewhere in France.

On Friday the War Office notified Mr. and Mrs. Samuel Higgins, who live at No. 11 New Street, Carleton that their son, Private Samuel Higgins of the 2nd Battalion West Riding Regiment, had died as a result of gas poisoning by the enemy in some place in France, which was un-stated.

Private Higgins was only 21 years old, and when war was declared was employed at Messrs. J. and A. Slingsby’s Carleton mill. He first joined the Army on December 29th 1912, when eighteen, although such was the family’s economic position that the mother ‘bought him out’ of the service. But in January of the following year young Higgins, who seemed bent on being a soldier, joined again, though curiously enough (and for reasons not given) at the time war was declared he was, as stated above, employed at Carleton. He was, nevertheless, called up and very shortly afterwards left Halifax Barracks for active service.

Private Higgins returned home wounded in the left hip on December 5th, and it may be recalled how the inhabitants of Carleton turned out and honoured him. After about six weeks’ furlough he recovered from the injury, and again proceeded to the Front – unfortunately never to return.

Much sympathy will be felt with the parents. We are informed that Private Higgins was a young man of excellent character, and very popular among his associates in the village. His brother, Private Allan Higgins, is serving in the local Territorial Battalion, the 1st 6th West Riding (Duke of Wellington’s) Regiment in France. We may add that in a letter received by his parents last week, the latter, who is in Section ‘A’ 2nd Company, writes:– “Just a few lines to let you know that I am in good health.”

Private Alan Higgins, it should be added, was earlier in the week reported missing, but the letter received from him on Saturday dispelled any question as to his safety.

Pte. Samuel Higgins, 2nd West Riding (Duke of Wellington’s) Regiment, died early in June from gas poisoning. Son of Mr. and Mrs. S. Higgins, of 11 New Street, Carleton. He was 21 years of age, and before the war was employed at Carleton Mill. He was wounded early in the war.

HOME FROM THE FRONT – Pte. A. Orcherton, of the Northumberland Fusiliers, has arrived home from the front on the usual ten days’ leave. Pte. Orcherton has been in France a considerable time, and up to the present hass passed through unhurt. Pte. A. Higgins, of the Duke of Wellington’s West Riding Regiment, arrived home on Saturday night for the usual ten days’ leave. Pte. Higgins was a member of the local Territorials when war was declared, and was mobilised at the commencement of the war. His only brother (Pte. S. Higgins) has made the supreme sacrifice for King and country, having been killed in action early in the war. Mr. Joseph Whiteoak, of Sunny Bank, has had a letter from his son, Pte. H. Whiteoak, who was reported as wounded and missing, saying that he is a prisoner of war in Germany.