William Atkinson Hodgson was the son of Christopher and Annie Hodgson, née Atkinson. Both parents were born at Ingleton, Yorkshire.

The British Army Service Record for William Atkinson Hodgson exists but may be incomplete.

William is listed in the Nominal Roll of the 1/6th Battalion Duke of Wellington's (West Riding Regiment): Pte W. A. Hodgson. 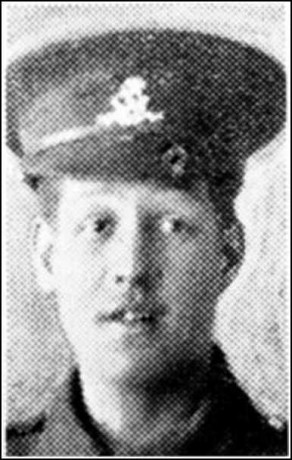 Pte. W. Hodgson, 6th Duke of Wellington’s West Riding Regiment, son of Mr. and Mrs. C. Hodgson, Park View, and Pte. Tom Heaps, Canadian Expeditionary Force, son of Mr. R. Heaps, Model Village, both of whom have been at the Front for some time, are at home on furlough. Pte. W. Robinson, 2-6th Duke of Wellington’s West Riding Regiment, is also at home on leave.

Mrs. Chris. Hodgson, Backgate, Ingleton, has had a letter from Corpl. J. Metcalfe, informing her that her youngest son, Pte. W. Hodgson, of the 6th Duke of Wellington’s West Riding T.F., had been wounded by shrapnel in several places. Pte Hodgson was the youngest of the Ingleton Territorials to go and fight for King and Country at the outbreak of the War and the hope is general that his wounds are not of a serious nature.

INGLETON – IN MEMORY OF THE FALLEN

A memorial service for Ingleton men who have fallen in the war was held in St. Mary’s Church on Sunday evening. There was a large congregation, and the service was of an impressive character. The Union Jack was hoisted half-mast on the tower during the day. At the commencement of the service the organist, Mr. C. Bentham, played ‘O rest in the Lord’, and at the conclusion the Dead March in ‘Saul’, 'How bright these glorious spirits shine’, and other hymns appropriate to the occasion were sung, as was also the National Anthem. Standing on the Chancel steps, Bugler J. Robinson sounded the ‘Last Post’, and its solemn and eerie notes reverberated along the aisles.

Before commencing his address, the vicar, the Rev. D. T. Davies, read out the list of those who had fallen, as follows:–

The Vicar, speaking from the words, ‘Greater love hath no man than this, that a man lay down his life for his friends’, said that the occasion brought them face in face with a question that was momentous to everyone, and the list which he had just read made them pause and ask the question, “Is the cause for which we are fighting of such a nature that these sacrifices are necessary?” They must remind themselves of the causes which led to the war. Our honour was pledged to protect a small country from an oppressing wrong, and we were compelled to stand by them. They were standing to protect a weak country from a fearful wrong committed by one of the strongest nations in the world – from a military point of view the strongest – a nation that was steadily prospering year after year and which had been training its manhood to satisfy its mad ambition for power. It was becoming clear, especially during the last few weeks, that the dominant note running through their proposals had been their determination that might should conquer over right, and that they would rule as masters over the whole world. When they analysed the causes they saw that the principles of justice and righteousness were struggling against oppression and wrong-doing. They had seen an attempt to impose injustice on the whole world, to impose the doctrine that might is right and mercy unknown by the will of one man, and to sweep away religion, man’s guidance, in a moment.

From his Parents and Family.

HODGSON – In sorrowful remembrance of our dear son, William Atkinson Hodgson, aged 19, who died July 5th, 1916, ‘Somme,’ and was buried in Puchvilliers Cemetery, near Amiens. Also in affectionate remembrance of our son-in-law, Beaufort Henry Creed, who died in Germany, December 24th, 1918.

At the going down of the sun and in the morning
We will remember them.

HODGSON – In sorrowful remembrance of my dear son, William Atkinson Hodgson, aged 19, who died July 5th, 1916, on the Somme, and was buried in Puchvilliers Cemetery, near Amiens. Also in loving memory of my son-in-law, Beaufort Henry Creed, who died in Germany, December 24th, 1918.

From Mother and Family.

HOME FROM THE FRONT – Pte. W. Hodgson, of the 6th Duke of Wellington’s West Riding Regiment, who is the youngest son of Mr. and Mrs. Chris Hodgson, is spending a well-earned rest at his home, Backgate, Ingleton. Pte. Hodgson is the youngest of the Ingleton Territorials serving. He is only 19 years of age, and has been in the fighting line over 12 months, this being the first leave granted to him. Pte. T. Heaps, son of Mr. and Mrs. R. Heaps, of Backgate, Ingleton, who is in the Canadian Forces; Pte. W. Robinson, son of Mr. and Mrs. T. Robinson, High Street, Ingleton, who is attached to the 6th Duke of Wellington’s; and Pte. J Sutton, son of Mr. and Mrs. R. Sutton, of Holly Platt, who is in the Royal Field Artillery, have all been spending a few days at their homes prior to removal abroad.

Mrs. Clapham, of the Craven Heifer Inn, Ingleton, has had a letter from her nephew, who is somewhere in France, which states that he is sorry to inform her that her son, Pte. Joseph Clapham, of the 9th Duke of Wellington’s, had been killed in a bayonet charge, near to Fricourt, on July 7th. Pte. Clapham, who was the youngest son of Mrs. Clapham, prior to enlisting was a gardener. He was of a very versatile nature, and was very popular. It has often been said of him by men who know that had he gone on the halls there was a good future for him. His loss is greatly regretted, and much sympathy is felt for his widowed mother.

Mr. and Mrs. Chris Hodgson have had a letter from Corpl. J. Metcalfe informing them that their youngest son, Pte. W. Hodgson, of the 6th Duke of Wellington’s (T.F.) had been wounded in several places by shrapnel. Pte. Hodgson was the youngest of the Ingleton Territorials to go for King and Country at the outbreak of war. His comrades all speak of his bright and cheery nature, and hopes are expressed that his wounds are not serious.

MEMORIAL SERVICE – On Sunday last a memorial service for the Ingleton soldiers who have fallen during the war was held in St. Mary’s Church. The flag on the tower was hoisted at half-mast. There was a very large congregation, and prior to the commencement of the service the organist (Mr. C. Bentham) played a solemn voluntary. The vicar (Rev. T. D. Davies) conducted the service, special prayers, psalms, and hymns being read and sung. The Vicar delivered a powerful sermon, taking as his text St. John, ch. 13 v., 13, “Greater love hath no man,” and prior to this read the following name of the Ingleton men killed and missing , some of whom have been presumed dead. The ‘Dead March’ was played at the close of the service, and the sounding of the ‘Last Post’ by Bugler J. Robinson concluded a solemn and impressive service. The following were the names read out by the vicar:–