William Bailey was the son of James and Lucy Bailey, née Smithies. James was born at Goosnargh and Lucy at Dutton, Lancashire.

William was married to Sarah Pickup in 1909. 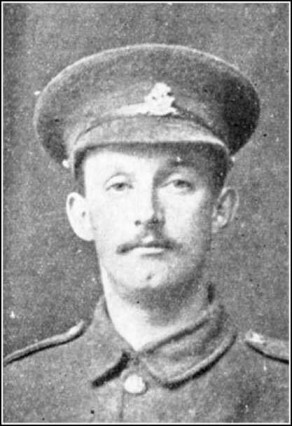 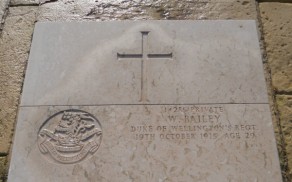 A MARTON HERO'S DEATH AT MALTA

The little village of West Marton, near Skipton, is mourning the death of one of its brave sons, Pte. W. Bailey, of the 8th Duke of Wellington's Regiment, who died at Malta October 19th, as the result of dysentery, aged 20 years. The deceased, a married man, was, prior to enlistment, a worker on the Gledstone estate of Lieut. Col. Roundell, and was much respected by all who knew him. His one desire was to fight against the Germans, and he tried three times before he succeeded in becoming one of Briton's sons serving at the Front.

Writing on September 20th, Pte. Bailey informed his wife that he was "in the pink", and added that "Steve Demain's lad" from Barnoldswick had been wounded two or three weeks previously. He had not seen or heard anything of the two footmen from Gledstone who joined the same battalion last August. On Friday, October 1st, Pte. Bailey wrote: "Last night my pal and I went water hunting. We managed to get our bottles filled, but it wasn't such clean water, though it went down all right. The Turks are just now shelling one of our Airships, but they are poor shots. I came across a man I knew the other night - Edgar Spencer. He worked for Edward Aldersley at Coates Farm, and at Swinden Hall. He is in our Company. A man in our Company was killed the other night by a shell. He belonged to Earby, and his name is Smith."
Pte. Bailey (14285) belonged to Z Company, 16th Platoon, 8th Battalion, Duke of Wellingtons Regiment, and he was attached to the British Mediterranean Expeditionary Force. He was a member of the Loyal Earl of Thanet Lodge of Oddfellows, Skipton. We offer our sincere sympathy to the sorrowing widow.

A large congregation attended the memorial service at the Parish Church in respect of Private W. Bailey, who died in Malta of dysentery contracted in Gallipoli. In the course of the sermon the Rev. G. H. East appropriately alluded to Mr. Bailey's noble self-sacrifice in offering his services to his King and Country, also to the cheerful and straightforward manner in which he undertook anything which came to hand. The 'Dead March' in 'Saul' was played at the conclusion of the evening service by Mr. Burgess.

He left his home in the flower of youth,
He looked so strong and brave;
We little thought how soon he'd be
Laid in a Hero's Grave.
We often sit and think of him
And think of how he died;
It seemed so hard for us to part
And never say Good-bye.

Ever remembered by his sorrowing Wife, Mother and Sisters.

We pictured his safe returning,
We longed to clasp his hand;
But God has postponed the meeting
Till we meet in the better land.

From his sorrowing Wife and Sisters, Church Cottage, East Marton-in-Craven.

"When the day breaks and the shadows flee away."