William Henry Townson was the son of Thomas and Esther Elizabeth Townson, née Brown. Thomas was born at Embsay and Esther at Hebden, Yorkshire.

William was married to Martha Lund in 1906.

William probably died of his wounds soon after falling into German hands. He would have been buried on the battlefield close to where died and his grave subsequently lost.

A short biography of William is included in: ‘Swaledale & Wharfedale Remembered - Aspects of Dales’ life through peace and war’ by Keith Taylor (2006). 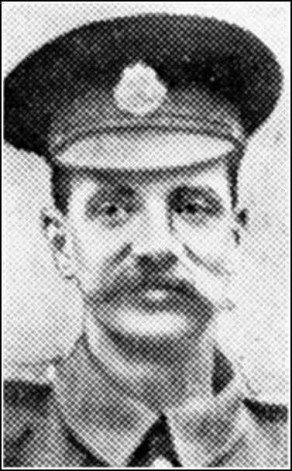 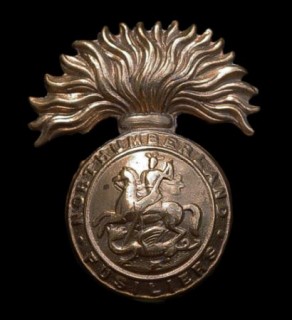 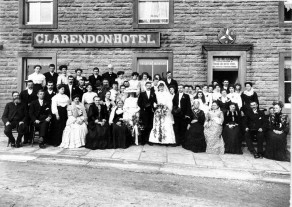 Wedding party outside the Clarendon Hotel, Hebden, after the marriage of William Henry Townson and Martha Lund in 1906

Courtesy of Hebden Parish Historical Data website: from the collection of David Joy

We are sorry to learn that the death is presumed of Private W.H. Townson, formerly landlord of the Blue Bell Inn, Kettlewell, the painful news having been received by his wife, Mrs. Townson, of Dale House, Kettlewell, through the Geneva Red Cross, Switzerland. The deceased soldier, who, we understand, was the only volunteer in Kettlewell, joined on June 16th 1916, the Northumberland Fusiliers. He had been twice wounded, the second time being last Christmas. He returned to France before the New Year, and has presumably been a prisoner of war and died in an enemy camp. The details to hand are very meagre, but there is no doubt that the gallant soldier has paid the supreme sacrifice, and we tender deep sympathy with the widow and relatives.

We reproduce a photograph of Private W. H. Townson, formerly landlord of the Blue Bell Inn, Kettlewell, whose death in an enemy camp was reported in our issue of October 11th. He joined on June 16th, 1916, the Northumberland Fusiliers, had been twice wounded, was taken prisoner after returning to France in December, 1917, and the information obtained through the Red Cross shows that he died while a prisoner of war. His widow lives at Dale House, Kettlewell.