William was married to Alice Atkinson in 1915. 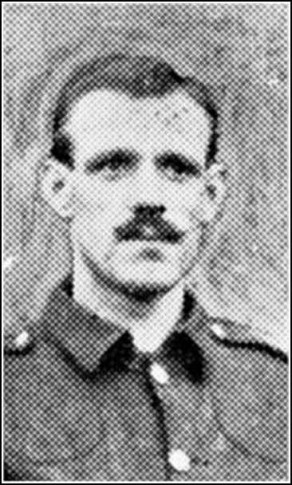 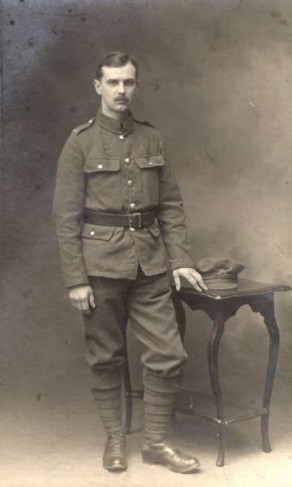 An interesting wedding was solemnized at Christ Church, Skipton, on Saturday last. The contracting parties were Bandsman Norman Holmes, of the 6th Battalion Duke of Wellington’s West Riding Regiment, and Miss Alice Atkinson, of Broughton Road, Skipton. On the termination of the ceremony the bridegroom’s fellow musicians formed up on either side of the pathway through the church-yard, and with their instruments formed an archway through which the happy couple passed on their way to the awaiting taxi. The bandsmen then lined up in front of the taxi-cab, and to the strains if martial music led the way to the home of the bride.

We regret to announce the following casualties:–

Private Charles England, of the Duke of Wellington’s Regiment, writing to his parents, Mr. and Mrs. Jonathan England, says:– “Just a few lines to let you know I am doing very nicely. I hope you got my field card to say I was wounded. It happened at midnight on Sunday. We were out in the front of our lines when he must have spotted us. I don’t know whether any were killed, but five or six of us were wounded and sorry to say I was amongst them. I think I shall pull through all right, so you must not trouble about me. It has been a pretty rough place where we were at, so I am not sorry to get away. We had only been up two days. I was wounded in the foot and four or five places in my body, but I shall be able to tell you more later. I am in a casualty clearing station and getting well looked after. I shall be moved from here this week-end, but whether I shall be lucky or not to get to ‘Blighty’ I cannot tell. I am thinking of it, as my right foot is pretty bad.” – The Sergeant of his platoon writes to his mother as follows:– “Dear Mrs. England, – I am sorry to inform you that your dear son Charles is wounded. He was out wiring with several others of his company and they were unfortunately caught by shell fire. He caught it in his foot and the rear of his body. He is quite cheerful after it all and hopes to get to ‘Blighty,’ and of course see you all again. There is really nothing serious, but at the same time he has got a nasty wound in his foot. I am sorry to say that six of his pals are wounded and one killed – all done at the same time. If I hear anything concerning him I will let you know at the earliest opportunity. We went to school together at Addingham, and he was one of my lads and is a real good soldier too. Trusting you will soon hear favourable news about him. – Sergeant W.N. Holmes.”

BOLTON-BY-BOWLAND – THE TOLL OF THE WAR

The war is exacting its full toll of our boys at the front, and the village is again in mourning as a consequence of the death of Private Nicholas Geldard, fourth son of Mr. and Mrs. Nicholas Geldard, of Strop Lane, who was killed in action on September 17th. Deceased was 22 years of age. He joined the 2/6th Duke of Wellington’s Regiment, and was most highly respected in the Army, as letters from his officers show.

Sergeant Holmes writes to Mrs. Geldard:– “I am very sorry to inform you that your son Nicholas was killed in action on the 17th September in the early hours of the morning. He was one of the lads in my company, and I feel his loss very much. He was a very quiet, unassuming and clean soldier – one of the best, and a soldier anyone could rely on at any time or in any danger. You have my deepest sympathy in your great loss. It is indeed a pity that such a career that he had in front of him should be cut off at such a short notice, but as we all know ‘God’s will be done. In the midst of life we are in death.’ All his friends feel it very much, he being with us so long, and then having to pay the price at practically the final stage of this horrible war. All the boys send their deepest sympathy and hope it will be some comfort to you knowing that he died a soldier’s death, facing the enemy all for the cause of liberty.”

Sergeant Garnett writes:– “I suppose by now you will have received the sad news of your son Nicholas. He was in my platoon and was highly respected by all who knew him as a quiet, willing, good lad. We all in the Company send our deepest sympathy; he has been decently buried behind the firing line. How his death occurred I will let you know later, but I am glad to say he suffered no pain, as death was instantaneous. We have his letters and personal belongings, and I will see to them being handed over to his brother in the 2/7th Battalion. We are still in the trenches, and having rather a hot time.”

Previously reported missing since November 27th, last, Sergeant Wm. Norman Holmes, Duke of Wellington’s Regiment, whose wife lives at 5 West Bradley Street, Skipton, is now officially presumed to have been killed on or since that date. An old Territorial and 28 years of age, he was in the Leeds Police Force prior to joining up, and before going to the Front in February this year [sic] he was conductor of the Regimental Band. He is one of the five soldier sons of Mr. Holmes, of Westmorland Street, Skipton, two of whom are in Egypt and two in training in England.

The photograph depicts Sergeant Wm. Norman Holmes, Duke of Wellington’s Regiment, whose wife lives at 5 West Bradley Street, Skipton, and who, as recorded in the ‘Herald’ last week, is officially presumed to have been killed on November 27th last or since on the Western Front. He was one of the five soldier sons of Mr. Holmes, of Westmorland Street, Skipton.

Mr. Flint has received the following letters in acknowledgement of parcels sent out:–

Sergt. Holmes writes:–“You will see by the papers that the boys are beginning to get a bit of their own back, and I think a few more months like this will make the Hun think we are getting the better of him; but it is not over yet. He will take a lot of putting out. When I got back I went to see the other Addingham lads and they called me lucky, but I think I was unlucky, because when I got back they were starting for 10 days’ leave, so they get three extra days for waiting. Thanks to all who subscribe to your fund.”

Sergt. Wm. Norman Holmes, of the Duke of Wellington’s West Riding Regiment, husband of Mrs. Holmes, of 5, West Bradley Street, Skipton, who has been missing since November 27th last year, is now presumed killed. A letter has been received from the Infantry Record Office, York, dated September 6th, stating that “The Army Council regretfully conclude that he is dead and that his death took place on November 27th, 1917 (or since).” Sergt. Holmes, who was 28 years of age, was married three years ago at Skipton and has one child. He was in the Leeds Police Force at the time of joining up, but had previously been in the Territorials for eight years. His father resides in Westmoreland Street, Skipton, and is a railway employee. Deceased was conductor of the Military Band until he went out to France in February this year. There are four brother serving, two in France, one in Egypt, and one in training in England.

Sec. Lieut. Pearson Kirk in a letter dated December 8th, 1917, to Mrs. Holmes states:– “I regret to inform you that your husband was wounded on November 27th. In the attack your husband did splendidly and we reached our objective in Bourlon village. In the afternoon the enemy attacked, and we had to withdraw slightly. As we were leaving the village your husband was wounded, and owing to the onrush of the enemy he, along with others, could not be got away. After the withdrawal three men went back to try and find him, but found the enemy occupying the ground, so had to return. In my opinion your husband will be a prisoner of war, and will probably be in hospital in Germany. He is reported wounded and missing, but I think you may be sure that the Germans would find him wounded and remove him with their wounded. He was a good sergeant and well liked by everyone, and we can ill spare him from the battalion.” A similar letter was also received from Lieut. W. Hardwick, who added that he had great faith that Sergt. Holmes had been taken prisoner.

His sacrifice was great, may his reward be the same.

– From his loving Wife and Child. 5, West Bradley Street, Skipton.