William Summers Holmes (born 20 October 1889) was the son of Timothy and Annie Holmes, née Smith and brother of Private Nelson Holmes (3417) (q.v.). Their father was born at Silsden and mother at Bradford, Yorkshire.

William was married to Nellie Knowles in 1913.

The British Army Service Record for William Summers Holmes exists but may be incomplete. 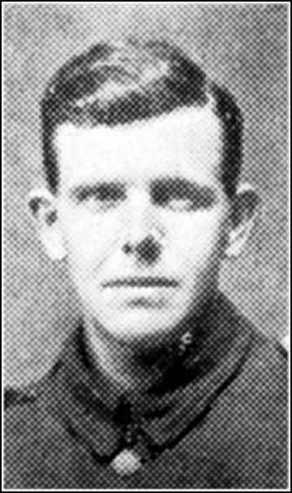 Mrs. Charles Sugden, Lady Superintendent of the Silsden St John Ambulance Nursing Division, has received a number of interesting letters from local soldiers and sailors conveying their thanks to the inhabitants of Silsden for the parcels which have recently been forwarded to them.

Private W. Holmes, of the 6th West Riding Regiment, states:– “It is a very useful parcel you have sent. It contains just the things we most need. This morning, for instance, if it had not been for the Swiss milk we should have had no milk in our tea. Then the cocoa will come in for an afternoon lunch; the Oxo provides us with the nourishment we require; the candles are accessories we could not well do without them; and the socks are most useful with the trenches in their present condition, for a change of socks is necessary every time we come out of the trenches. They were just what I was in the need of. The mints are also very acceptable as I have a slight cold at present.”

Another interesting batch of letters are to hand from Silsden soldiers and sailors on active service acknowledging the receipt of more parcels. The contents of the parcels sent out included a pair of socks, a quantity of sweets, cake, Oxo tablets, cocoa tablets, tin of Swiss milk, trench body cord, tea tablets, and a card bearing the inscription ‘With the best wishes from the inhabitants of Silsden.’ Most of the socks had been knitted by the members of the Silsden Parish Church Girls’ Friendly Society, whose efforts some time ago enabled them to set aside funds for the purchase of wool. Appended are extracts from the letters which have been sent to Mrs. Charles Sugden, of Bolton Road, Silsden:–

Pte. Harry Sykes, of the 6th Battalion, Border Regiment, writes:–“I suppose you will have heard about the Silsden boys going down out here. It is a credit to the town to know that they fell fighting for their King and Country. I am glad to tell you I came across one of the Silsden boys out here the other week. His name is William Holmes, and it was quite a treat to have a chat with someone I knew. I think I am lucky to have been on active service for thirteen months and am quite all right at present. I got a slight wound on the Peninsula, but it was nothing, and I was not long before I was all right again.”

[We] also [reproduce a photograph] of Pte. William S. Holmes, of the same [Duke of Wellington's] regiment, a native of Silsden, whose widow also lives in Skipton, and who succumbed to influenza, October 25th, 1918, whilst on active service in Italy.

Mrs. Wm. Summers Holmes, Silsden, has received word in a very touching letter from the assistant matron of the 29th Stationary Hospital, Italy, that her husband had died from influenza. Pte. Holmes joined the army on the 5th of August, 1914, and went with the 8th Dukes to Gallipoli and after service there was transferred to Egypt, then from Egypt to France, and from France to Italy. Although he had been in many battles he had never been wounded. Pte. Holmes leaves a widow and two little children. He is the son of the late Timothy Holmes, Aireview, Silsden. His brother, Pte. Nelson Holmes, was killed in 1915; another brother, Pte. Edgar Holmes, was wounded in the arm and has since been discharged.