William Reynolds Armstrong was the son of George William and Jane Ann Armstrong, née Reynolds. George was born at Cumwhinton near Wetheral and Jane at Arthuret, Cumberland. 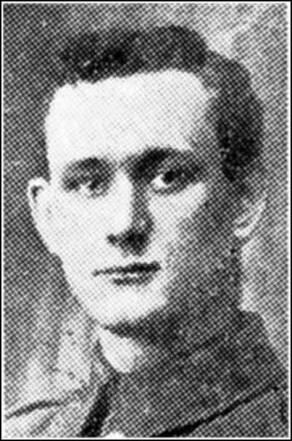 Private James Watson Garwood, one of the two soldier sons of Mr. John Garwood, 73 Keighley Road, Skipton, was killed while asleep in his dugout by the bursting of a shell on April 12th - 13th. Before enlisting in the West Riding Regiment a month after the outbreak of war, he was a weaver at Alexandra Shed (Mr. S.H. Walton's), and was an earnest worker in connection with the Gargrave Road Primitive Methodist Church, being closely associated with the Christian Endeavour Society. He was 22 years of age and had been at the Front about two years, having been wounded twice, the last time in June last year. He only returned to the Front six weeks ago. Mr. Garwood's other son, Corpl. Daniel Garwood, is serving at the Front with the Loyal North Lancashire Regiment. Corpl. Wilfred Turnbull and Corporal W.R. Armstrong, two Skipton soldiers and 'pals' of deceased, have written the bereaved family expressing their sympathy and testifying to the deceased's work as a soldier and his character as a man and a 'pal'.

In a letter of sympathy to the parents, a Chaplain says that Corporal Armstrong was only able to give his home address and to send his love to his father and mother before he passed away, and adds:- "I took the service at the graveside and a cross will mark his grave. May you find some consolation in your grief in the thought that he gave the supreme offering of his life to help to overthrow the forces of tyranny and to win liberty for the world."

Corporal Armstrong, who was 24 years of age, enlisted in September 1914, and had been in France three years. He was formerly a loomer and twister for Messrs S. Farey and Sons, Skipton, and was a member of the Skipton Congregational Church, where a memorial service was held on Sunday evening, conducted by the Rev. L.H. Gaunt. The large congregation included members of the Skipton Mission Band.

Mr. and Mrs. Armstrong have another son in the Army - Private Henry Armstrong, North Staffordshire Regiment, who has been wounded in the back by shrapnel and is in hospital in France.

ARMSTRONG - In loving memory of Corporal W. R. Armstrong, of the 1/6th Duke of Wellington's, who died of wounds received in action on April 29th, 1918, aged 24 years.

This day brings back sad memories
Of one who is called to rest;
And those who think of him today
Are those who loved him best.

From his loving Father and Mother, Brothers and Sisters, 22 George Street, Skipton.

ARMSTRONG - In loving memory of our dear son and brother, Cpl. W. R. Armstrong, who died of wounds in France, April 29th, 1918.

We think of him in silence,
But not with outward show.
For the heart that mourns sincerely
Mourns silently and low.

From his loving Father and Mother, Brothers and Sisters, 22 George Street, Skipton.

"Only those who have loved and lost can understand."

Pte. James Watson Garwood, of the West Riding Regiment, son of Mr. John Garwood, of 73, Keighley Road, Skipton, was killed between April 12th and 13th with a shell whilst asleep in his dug-out. Pte. Garwood, who was 22 years of age, enlisted soon after the outbreak of war, and had been out in France about two years. During that time he was twice wounded, the last occasion being in June, and he had only been back in France about six weeks after recovering from his injuries. Prior to enlisting he was employed as a weaver at Alexandra Shed. Pte. Garwood was closely connected with the Gargrave Road Primitive Methodist Church, being a prominent worker in connection with the Christian Endeavour Society. A letter has been received from Corporal Wilfred Turnbull and Corporal W.R. Armstrong, two of Pte. Garwood's pals, expressing their sympathy, and stating that they had been unable to obtain any details regarding his death. Mr.Garwood has another son, Corporal Daniel Garwood, who is serving with the Loyal North Lancashire Regiment.

Second-Lieutenant Browning in a letter to the deceased soldier's parents, states.:- "I am very sorry indeed to inform you that your son was killed in action early this morning (April 13th) about a quarter past twelve. He was asleep in a shelter, when he was hit by a piece of shell and killed instantaneously. He suffered no pain at all. It is very hard luck after being out here two years. I am very sorry to lose him from the platoon, as he was a splendid soldier. Please accept my deepest sympathy. The only consolation is he died for his King and country. "

Letters of sympathy have also been received from the Army Chaplain and Pte. E.E. Hall, of Otley, a chum of the deceased soldier.

We regret to announce that Corpl. Wm. R. Armstrong, of the Duke of Wellington's West Riding Regiment, eldest son of Mr. and Mrs. George Wm. Armstrong, of 22, George Street, Skipton, has died of wounds received in action at the 10th Casualty Clearing Station, France. In a letter to Mr. and Mrs. Armstrong, a chaplain writes:- "You will probably have heard from the War Office about your son being brought into hospital wounded. He was able to give his home address and to send his love to you, and then passed away. I took the service at his graveside, and a cross will mark the grave. You may find some consolation to your grief in the thought that he gave the supreme offering of his life to help to overthrow the forces of tyranny and to win liberty for the world." Corpl. Armstrong, who was 24 years of age, enlisted in September, 1914, and had been out in France about three years. He had three times previously been wounded. He was formerly employed as a loomer and twister by Messrs. Samuel Farey and Son, manufacturers, Skipton. and was a member of the Skipton Mission Band. He was also a member of the Skipton Congregational Church, where a memorial service was held on Sunday evening last, conducted by Rev. L. H. Gaunt. The members of the Skipton Mission Band were in attendance.