William Walker Jackson (born 31 May 1895) was the son of William and Harriet Jackson, née Walker. William, senior, was born at Horton-in-Ribblesdale and Harriet at Burton-in-Lonsdale, Yorkshire.

The British Army Service Record for William Walker Jackson exists but may be incomplete. 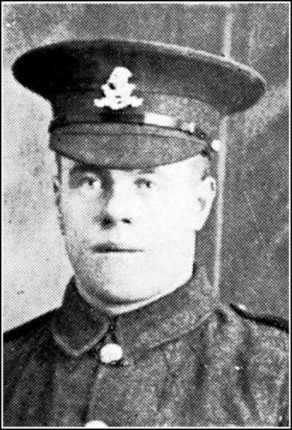 Still another name is added to the Roll of Honour by the death in action in France of Signaller William Walker Jackson, elder son of Mr. and Mrs. Wm. Jackson, of Dub Cote.

The first intimation of something amiss was contained in a letter of September 25th to Mrs. Jackson from a comrade, who states:– “I am writing to let you know that Willie was rather badly wounded when we were in another roughish corner, and although I have made enquiries I cannot get any definite information respecting him. So far he is reported wounded and missing, as they have not got any word as to his passing through any of the dressing stations. It happened on the morning of the 20th. Although we had a rough time of it we had quite a victory. The night before we went up I had a talk with Willie, who was quite up with it. We realised that some would be sorted out and would not come back. The Colonel made a touching speech yesterday when we got back and congratulated us on the splendid manner in which we did the task allotted to us. Tears of pride came into our eyes as we stood listening to him, mingled with tears of sorrow as we thought of those who had paid the price. It is only in moments such as these that you would think we have any feeling at all. Our Commanding Officer is a rare sort, and I don’t think there is a man who would not give his life for him.”

Subsequent communications from the deceased’s company officer gave but little hope of his being alive, and the fateful news was received on Friday morning with intense regret and a sense of profound sympathy with the bereaved parents and family that Signaller W. W. Jackson had been killed in action in France on September 20th. Such loss would indeed be very depressing were it not redeemed by the knowledge that these brave men do their duty so fearlessly and well for the great cause of human liberty and the defence of our Empire.

The deceased, born May 31st, 1895, was educated at Horton School, of which his mother was an esteemed member of the staff some years’ ago, and proved an intelligent scholar. After leaving school, he assisted his father on a farm, and his patriotism being aroused he joined up on November 16th 1915, and was attached to the West Riding Regiment. The greater part of his training took place at North Shields, where he passed for service as a first-class signaller. He was home on final leave in August 1916, and proceeded to the Western Front last February. His letters home were always cheerful, despite the execrable climatic conditions often pertaining, and the continuous shrieking and whistling of shells.

The family desire to express their appreciation of the many messages of sympathy accorded them.

He left his home at duty’s call
And freely gave his life for all.