Alfred Briscoe (born 12 August 1877) was the son of Christopher Ellershaw and Sarah Ann Briscoe, née Brayshaw. Christopher was born at Ingleton and Sarah at Newby near Clapham, Yorkshire.

Alfred Briscoe was married to Elizabeth Gill Fielder, née Peterson in 1911. Elizabeth was the widow of Richard Fielder, a mariner. Two of their sons served with the Canadian Army in the Great War. One, Private John Armstrong Fielder (171615), 3rd Bn Canadian Infantry was killed in action 3 May 1917. He is commemorated on the Vimy Memorial. 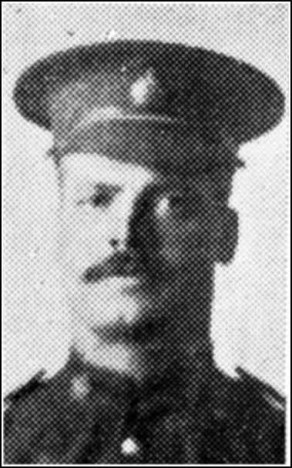 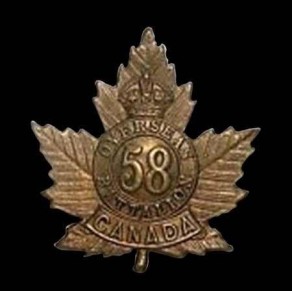 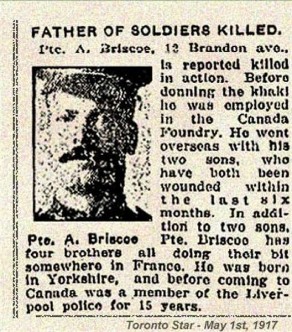 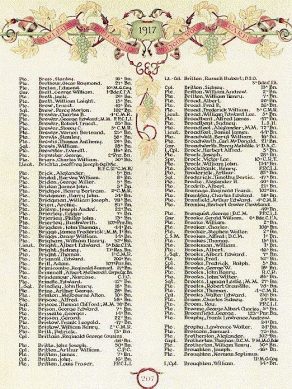 Four sons of the late Christopher and Mrs. Briscoe, Bridge End, Burton-in-Lonsdale, have joined the Canadian Expeditionary Force. They emigrated about four years ago and settled in Toronto, where they have left their wives and families. Gamaliel, Frederic and Christopher have joined the 238th Forestry Battalion and along with a Canadian friend visited their old home during the week-end. On Friday they visited Thornton's School where all the family were educated, and were delighted to see the collection of photographs of old scholars in khaki. They returned to camp near Godalming on Tuesday. The fourth brother-Alfred- is in the 170th Battalion Mississauga Horse, C.E.F.

Mrs. Briscoe, Greta Cottages, has now five soldier sons, her youngest son, William Edward, having joined the R.A.M.C. and gone into training at Blackpool. Her other sons were all in Canada when war broke out, and Alfred joined the Mississauga Horse of the C.E.F., and Gamaliel, Frederick and Christopher joined the 238th Canadian Forestry Battalion, and have been engaged in felling the New Forest, Hampshire.

Mrs. Briscoe of Greta Cottages now holds the record in Bentham Parish of having five soldier sons. Four of them joined up in Canada and arrived home on furlough in October last. Gamaliel, the eldest, and Christopher Ellershaw and Frederick Henry, are in the Foresters' Battalion, while Alfred is in the trenches in France. The youngest son, Pte. William Edward, joined the R.A.M.C. last week and is stationed in Blackpool.

Trooper Alfred Briscoe, Mississanga Horse, Canadian E.F., was killed in action on April 12th. Deceased, who was in his 39th year, was the second of the five soldier sons of Mrs. Briscoe, Bridge End Cottages, and emigrated to Canada some six years ago and settled in Toronto. He enlisted in October 1915, and went out to France last October. On Sunday a cablegram was received by the Rev. R. Stowell, vicar of Burton, from Mrs. Briscoe, Toronto, announcing the death of Alf, and he conveyed the sad tidings to his mother and sisters. Trooper Briscoe was an 'old boy' of Thornton's Schools and for some time before proceeding to Canada was a police constable in Liverpool. He leaves a widow and one child.