Harry Maudsley was the son of Stephen Henry and Mary Maudsley, née Smith. Both parents were born at Skipton, Yorkshire. Harry may have been distantly related to Sgt Herbert Maudsley (265693) (q.v.).

Harry was married to Maud Annie Harrison in 1914.

The British Army Service Record for Harry Maudsley exists but may be incomplete. 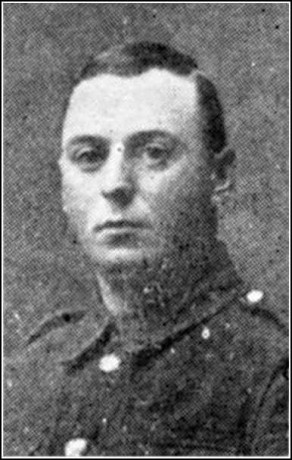 Private Henry Maudsley, West Riding Regiment, who, we regret to say, died on April 16th in a Casualty Clearing Station, France, from wounds in the back, was one of the three soldier sons of Mrs. Stephen Henry Maudsley, 17 Pendle Street, Skipton. He leaves a widow, who lives at 2 Aire View Terrace, Skipton. Twenty-nine years of age he enlisted in October 1916, and had been at the Front sixteen months. He was formerly in the employ of Mr. A. Core, greengrocer, Keighley Road, Skipton.

His two brothers, Pte. George Maudsley and Pte. James Maudsley, are both in the West Riding Regiment, the former at present being in hospital at Liverpool suffering from septic poisoning following an accident in France.

God shall clasp the broken chain
Closer when we meet again.

From his loving Wife at 2 Aire View Terrace.

“A day of remembrance sad to recall.”

From George and Ethel and all at 33 Ings Avenue, Skipton.

His heart was good, his spirit brave,
His resting place a soldier’s grave;
A loving son and brother kind,
A beautiful memory left behind.

From Mother, Sisters and Brothers.

“May his reward be as great as his sacrifice.”

From Harold and Sarah, Sheffield.

I who loved you sadly miss you
As it dawns another year;
In the lonely hours of thinking
Thoughts of you are ever near.

From his loving wife and all at 2 Aire View Terrace, Skipton.

From his loving Wife, and All at 2 Aire View Terrace, Broughton Road, Skipton.

From Harold and Sarah, Sheffield.

From Mother, Sisters and Brothers.