Herbert Douglas Routledge (born 23 August 1887) was the son of William James and Jane Routledge, née Kirkbride and brother of Trumpeter Thomas Kirkbride Routledge (230093) (q.v.). Their father was born at Bewcastle and mother at Newton Reigny, Cumberland.

Herbert was married to Lilian Tomlinson in 1911 and was the brother-in-law of Private Syril Tomlinson (1690) (q.v.).

The British Army Pension Record for Herbert Douglas Routledge exists but may be incomplete. 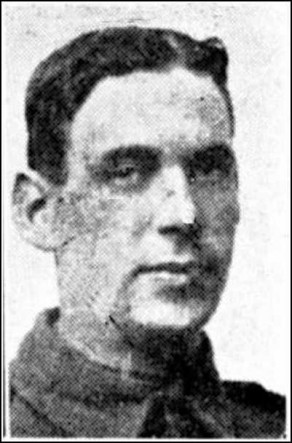 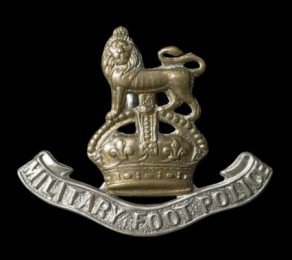 ROUTLEDGE, HERBERT DOUGLAS, L.-Corpl., No 1974, 8th (Territorial) Battn. The Prince of Wales’s Own (West Yorkshire Regt.), 2nd s. of William James Routledge, of Hollin Tree, Ingleton, co. York, by his wife, Jane,dau. of Thomas Kirkbride; and brother to Trumpeter T.K. Routledge (q.v.); b. Penrith, co. Cumberland, 23 Aug. 1887; educ. Barnard Castle, co. Durham; was employed as a Clerk by the Midland Railway Co.; enlisted in the West Riding Regt. (33rd Foot) in 1903; served three years with the Colours, and joined the Reserve; was called up on the outbreak of war, but rejected as medically unfit; subsequently re-enlisted in the West Yorkshire Regt.; served with the Expeditionary Force in France and Flanders from April 1915; was gassed near Ypres in Dec. 1916, and invalided to England; later appointed to the Military Police on Home Service, and died at Ilkley 2 Jan. 1919, from phthisis resulting from gas poisoning, received while on active service. Buried at Ingleton, co. York; unm. [sic] 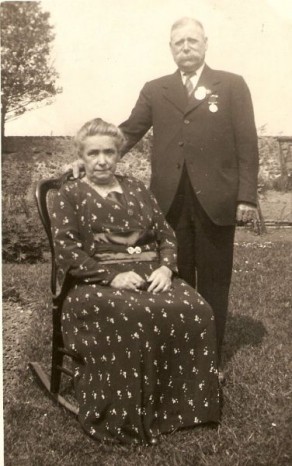 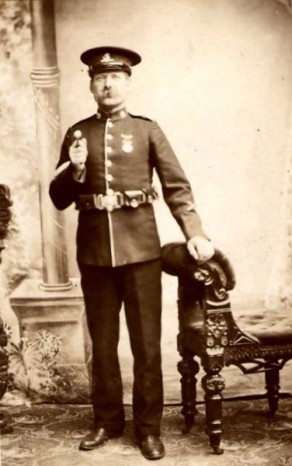 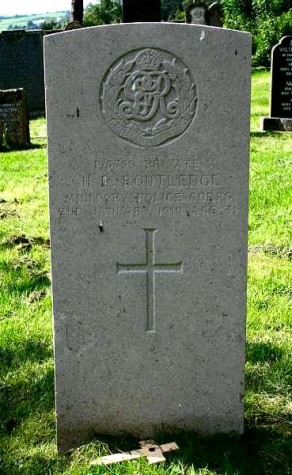 INGLETON AND THE WAR – The Sixth Fatality

Amongst those who attested at Settle were the following from Ingleton Fells:–

Pte. W. Bolton, 6th Duke of Wellington’s West Riding Regiment, was killed by shrapnel some time ago. He is the fifth Ingletonian to lay down his life for his country.

Pte. Stanley Thornber was shot through the chest some weeks ago, the bullet passing above the heart. The bullet has not been extracted, as an operation might prove dangerous.

Pte. Harold Howson, who has been in hospital suffering from trench foot, is at home, and Privates Joe Vickers and J. W. Robinson are at home on furlough from the Front.

News has just been received that Pte Cyril Tomlinson, 21 years of age, has been killed in the trenches by a sniper. He was the eldest son of Pte. Edward Tomlinson, Main Street; and went out to the Front with the 6th Duke of Wellington’s Regiment. Immediately on receipt of the sad intelligence, the Union Jack was hoisted half-mast at St. Mary’s Church. He is the sixth Ingletonian to give up his life for his King and country. As well as his father he has two brothers and several relatives serving with the forces. His brother-in-law, Pte. H. Routledge, has been gassed and is now in hospital at Lincoln.

Dr. Mackenzie has received a telegram from the War Office intimating that his son, Capt. Gordon Mackenzie, has been wounded in action, but the extent of his injuries is not yet known.

It is also reported that Pte. J. Nash and Pte. J. Waring have been wounded, and Pte. J. Clapham gassed, so that it would appear that the Ingletonians have been in the thick of it recently.

Lance-Corporal H.D. Routledge has been home on sick leave. He was gassed some time ago and hurled into a crater, sustaining a severe shock. He has now been ordered to report himself in Ireland and sailed on Saturday night from Holyhead.

Seaman Victor Marklew, who has joined the Navy, has been home for a few days’ leave from somewhere in the North Sea.

Mr.and Mrs. John Slinger (Albion House, Ingleton) are to be congratulated on the part their children are playing in the war. They have nine sons, 3 sons-in-law, three grandsons, two grandsons-in-law, and several nephews now or recently serving in His Majesty’s Forces. Their names are:–

…Amongst others who have been spending a few days leave at home are:–Corporal H. Routledge, Quarter-Master Sergeant J.W. Lambert and Pte. James Hodkinson, of Masongill.

Amongst those who have been home on leave during the past week are Pte. T.E. Thistlethwaite, Pte. Jack Tomlinson, Pte Charles Marklew, Pte. Chris Briscoe and Corporal H.D. Routledge…

For the second time within a few days three persons have been lying dead at the same time. On Sunday last Miss Elsie Routledge passed away at the early age of 23. She was formerly employed at the Co-operative Stores, where she gained the esteem and goodwill of all, and latterly as clerk at the Midland Railway Station. As a member of St. Mary’s choir her services were much appreciated, and her early demise is generally regretted. Some months ago her declining health became noticeable, and she went into a sanatorium at Ilkley, but all in vain, and she returned home only to die. Much sympathy is felt for the bereaved parents. Mr. and Mrs. W.J. Routledge, Hollin Tree, have recently had more than their share of trouble. A few weeks ago one of their sons, Trumpeter T.E. [sic] Routledge, of the Dorset Yeomanry, was killed in action in Palestine, and another, Corporal H.D. Routledge, was badly gassed in France. He is now in a sanatorium at Ilkley and is in a very critical condition of health. An old volunteer with the long service medal, Mr. Routledge joined up when war broke out, and has four sons serving with his Majesty’s Forces…

One of the most impressive and largely attended funerals ever held at Ingleton took place on Monday, when Lance-Corporal H. D. Routledge was laid to rest in the Cemetery. As a Reservist, he was called up at the outbreak of war, and was badly gassed in France. A few months ago he entered a sanatorium at Ilkley, but the mischief was beyond cure, and he gradually sank, dying on Thursday the 2nd inst. The first portion of the Burial Service was taken in the church by the Vicar, where the hymns ‘Rock of Ages’ and ‘Thy will be done’ were sung. As the cortege left the church the organist played a funeral march. The coffin, wrapped in a Union Jack and covered with beautiful wreaths, was borne by relays of soldiers on leave, under the charge of Sergt. F. Slinger. The Colliery Band played the ‘Dead March’ as the large procession slowly wound its way through the village, where all the blinds were drawn as a token of respect and sympathy. After the last rights had been performed, a firing party, under the command of Sergt. G. Littlefair, fired three volleys over the grave, and the ‘Last Post’ was sounded by Bugler R. Robinson.

Lance-Corporal Routledge was 31 years of age, and leaves a widow and three children. Much sympathy is felt for Private and Mrs. W. J. Routledge, Hollin Tree, in the triple bereavement they have recently sustained. A short time ago their son, Trumpeter Tom Routledge, was killed in Palestine, and their daughter Elsie, aged 23, was laid to rest a few days ago. The death of Lance-Corporal H. D. Routledge makes three deaths, all of young people, within a few months. Mr. J. Howarth had charge of the funeral arrangement.

“Though lost to sight, to memory dear.”

“For ever in our thoughts.”

Several Ingleton homes have been cast under a shadow during the last few … casualties … occurred … fighting in Flanders. The Ingleton Territorial Detachment, which numbered about 50, although they had been in the fighting line since April, had escaped any casualty of a fatal nature, but this run of good luck has unfortunately been broken and much sympathy is felt for Pte. And Mrs. Edward Tomlinson and family, of Lemon Cottage, in the loss of their eldest son, Cyril, aged 23, who has been killed by a sniper in Flanders, death being instantaneous. The deceased’s father and two younger brothers, two brothers-in-law, and four uncles are serving their King and Country. Prior to going away he followed the employment of shoemaker, and worked for Mr. Bryan Holmes, of Bentham. The flag on St. Mary’s Church was flying at half mast out of respect to the deceased. This raises the toll of Ingleton to four.

On Monday evening Dr. J. Mackenzie Broadwood, Ingleton, received a wire to say that his son, Lieut. Gordon Mackenzie, of the K.O.Y.L.I., had been gassed and was in hospital in France. Lieut. Mackenzie was over on short leave only a fortnight ago.

On Wednesday Mr. And Mrs. G. Walling, of Ferncliffe, Ingleton, received information that their eldest son, Lieut. Ernest Walling, who is attached to the 8th Battalion Leeds Rifles, was in hospital suffering from gas poisoning.

On Monday, the 27th, Mrs. Routledge, The Square, Ingleton, received word that her husband, Pte. Herbert Routledge, had been gassed, and was suffering from injuries caused by falling into a shell-hole, and was in hospital at Lincoln awaiting an operation. Pte. Routledge is the brother-in-law to the young man Tomlinson who has been killed.

From information received from young men who have arrived on leave from the trenches it appears that Pte. Jack Wearing, son of Mr. And Mrs. Henry Wearing, of Rock Cottage, Ingleton, has been wounded, but the extent of the wounds are not known at the time of writing. He was attached to the 6th Duke of Wellington’s West Riding Regiment (Territorials).

HOME FROM THE FRONT – During the past few days several Ingleton boys have been over on leave Private Jack Tomlinson, of the Tunnelling Corps, who has been out in France and seen much active service, is spending ten days with his relatives. Corporal H. Routledge, The Square, Ingleton, is also on short leave; he is attached to the Leeds Rifles and has spent considerable time on active service. Private Chris. Briscoe, Private J. Stevenson. and Private C. Marklew are also on leave from their various camps.