John Edward Lovick was the son of Henry and Elizabeth Ann [Lizzie] Lovick, née Hartley, and was the brother of Private Roland Lovick (51995) (q.v.). Their father was born at Todmorden, Yorkshire and mother at Bacup, Lancashire.

John and Roland are commemorated on the Bacup Roll of Honour Board. 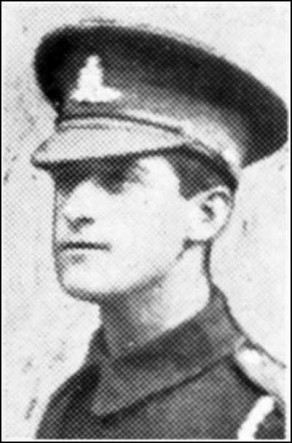 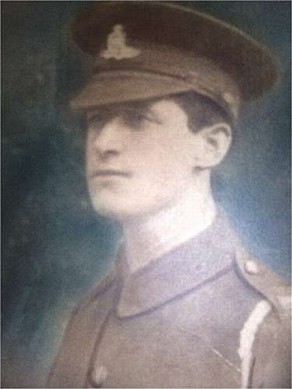 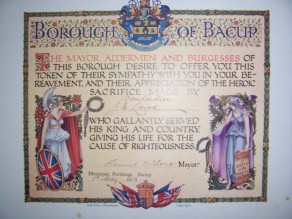 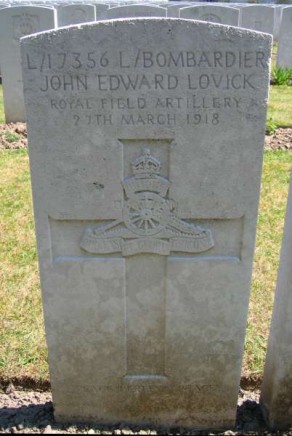 Letters received by Mrs. H. Lovick, 207 Gisburn Road, show that the death of her eldest son, Bombardier John Edward Lovick, R.F.A., took place on the 26th March. He was wounded whilst taking despatches to headquarters, and died in the train on the way to the base hospital. The chaplain wrote stating he had been buried at Etaples. Bombardier Lovick was 22 years of age and a native of Bacup. He went to France in January, 1916.

Mrs. Lovick, 207 Gisburn Road, Barnoldswick, received on Saturday morning the distressing news that her second son, Private Roland Lovick, K.O.Y.L.I., had been killed in France. This is the second bereavement she has suffered within the space of four months, her eldest son Bombardier J. E. Lovick, R.F.A., having been killed on March 27th. Private R. Lovick, who had been in France just over three months, was killed on the 2nd inst., six days before attaining the age of 19. In a letter of condolence to Mrs. Lovick, Captain Leach writes:– “He was sleeping in bivouac in our Company Camp, with two other young soldiers, when a shell burst near them, and they had no knowledge whatever of what happened. This was in the early morning of July 2nd.”

It is a pathetic coincidence that the older brother met his death on the same day the younger left England. Private Lovick was formerly a weaver at Messrs. Nutter’s Bankfield Shed.

We pictured their safe returning,
We longed to clasp their hands,
But God has postponed the meeting,
Till we meet in the Better Land.

From Grandad and Grandma, Uncles and Aunts, Barnoldswick.

We look around, but see them not;
We list, but hear no more
The welcome of the well-known voices
That cheered our hearts of yore.

Letters received by Mrs. H. Lovick, 207, Gisburn Road, Barnoldswick, report the death of her eldest son, Bomdr. John Edward Lovick, R.F.A., on March 26th. He was wounded whilst taking despatches to headquarters, and died in the train on the way to the base hospital. The chaplain wrote stating he had been buried at Etaples. Bdr. Lovick was 22 years of age, and a native of Bacup. He went to France in January, 1916.