John was killed in an I.R.A. ambush at Scramogue, Co. Roscommon, during the Irish War of Independence. 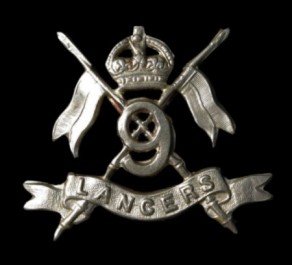 A party of military and police were ambushed at 7 o’clock yesterday morning at Scramoge, Strokestown, County Roscommon. A captain was killed, and one lieutenant, three soldiers, and one policeman were wounded, and three soldiers and two policemen are missing. The lieutenant died later from his wounds.

A mixed party of 9th Lancers and R.I.C., totalling nine, and travelling on a Crossley tender, were ambushed at 7.15 a.m. at Scramoge, two miles from Strokestown, County Roscommon.

The ambushers, who numbered about forty, opened a very heavy fire from point-blank range on the car as it approached a bend in the road, killing an officer and one R.A.S.C. driver and wounding four others of the small party. They then destroyed the car and took away two unwounded R.I.C.

As soon as this was reported parties of military and police at once left Longford and Strokestown for the scene, and up to 6 this evening had succeeded in capturing two armed rebels in the vicinity of the ambush. The search is continuing.

The total casualties to the Crown forces are–One officer and one other rank killed; one officer died of wounds; three other ranks wounded; one R.I.C. wounded; and two R.I.C. missing.

The Lancer officer killed is a baronet, Sir Wilfrid Peek, a nephew of Earl Midleton.

A local correspondent, describing the Scramoge ambush says: – Captake [sic] Peake and four soldiers were shot dead and several others were wounded. The ambush was prepared at cross-roads flanked by a dense wood, and it is surmised the attack was made from the wood on one side and from houses on the other side. Captain Peake was an extremely popular officer in county Roscommon, and his tragic end is much deplored at Strokestown, where all shops were shuttered as a mark of sympathy.

The remains of Captain Sir William Peek, D.S.O., and Lieutenant Tennant, both of the 9th Lancers, were removed from the Upper Military Barracks, Longford, and conveyed to St. John’s Church, where a memorial service, conducted by the rector, Rev. Mr. Justice, took place in the presence of a large congregation. The coffins were draped with Union Jacks, and the funeral afterwards to the railway station was one of the most impressive spectacles witnessed in Longford for a long time. All the houses in the town were closed. The band of the 9th Lancers headed the procession. The officers of the regiment followed the tenders on which were the remains. Next came the cavalry, a detachment of the Auxiliary Police Force, a large body of Royal Irish Constabulary, under command of County Inspector Richardson and District Inspector Hawkins, and a strong party of the Comrades of the Great War, and large numbers of the townspeople. The remains were taken by the 3.36 p.m. train to Dublin, and from thence to England.

Captain Peek’s service in the army had almost expired, and it is said that he had made arrangements for a trip round the world. He was very popular in Strokestown while on detachment duty, and the inhabitants were much distressed on hearing of his death. Lieutenant Tennant had only reached his twenty-second year. He was well known in Longford, and was highly esteemed, especially in sporting circles, where he made a host of friends. He took a great interest in coursing, and was a member and supporter of all the clubs in and around Longford.

It is stated that two arrests have been made in connection with the ambush.

Since the ambush all the business houses in Strokestown have been closed by order of the authorities. A house near where the attack took place has been destroyed.

THE USE OF EXPANDING BULLETS

The following official statements are issued from Dublin Castle: –

At a military court of inquiry, in lieu of inquest, held at Athlone concerning the death of Private John Keenan, M.T., who was killed in an ambush near Strokestown, the evidence of a soldier who was on the car showed that at a bend in the road the patrol was fired upon from a house by civilians. The driver was hit immediately, and shut off his engine, the car stopping after a little while. The witness saw Captain Peek and another officer get out of the car on the road.

“As I was busy firing my machine gun,” continued the witness, “and was wounded in the arm and in the face, I did not see much more. Shortly after I heard voices from the houses ordering two Royal Irish Constabulary constables who were with us to go into the house from which the fire had been directed. Civilians came out of the house, poured petrol on our car, and set fire to it. There were about forty men altogether, and some of them wore ‘Sam Browne’ belts. One of these men ordered some of the attackers to hurry up and go back to Strokestown.” He told the witness to turn about, so that he could not see him, and said if he recognised him he would be “for it.”

Another witness, who was acting as rear lookout of the car, gave evidence of the opening of the attack. He saw Captain Peek run towards a wall and then fall. The witness was hit twice and his rifle was hit twice in his hand. As he was lying wounded on the road he saw another officer, Lieutenant Tennant, standing in some bushes. He was fired on and fell, but witness did not notice what happened to Driver Keenan.

It was stated that the Court had viewed the wounds of two other soldiers who were caught in the ambush, and that both were terrible wounds, caused by explosive bullets.

In the case of Keenan, the Court found that he was wilfully murdered by some person or persons unknown, and that from the appearance of his wound, and those of the other men wounded, explosive or dum-dum bullets were used.

In connection with the same ambush, military courts of inquiry were held at Longford concerning the deaths of Captain R. G. Peek and Lieutenant R. H. A. Tennant, both of the 9th Lancers, who were killed. The evidence of an officer showed that, on hearing heavy rifle fire coming from the direction of Scramogue, he at once took out a party on the Longford road. Near Scramogue cross-roads he found one of their tenders burning. Captain Peek lay dead and Lieutenant Tennant was seriously wounded, and also the remainder of the party. He had Lieutenant Tennant removed, and he died later.

A doctor stated that he examined Lieutenant Tennant before he died. One wound in the chest was made apparently by an expanding bullet. The doctor described other wounds on the body, which were numerous.

The Court returned a finding that Captain Peek and Lieutenant Tennant were wilfully murdered by unknown persons.

Capt. R. C. Peek and Lieut. J. H. Tennant, both of the 9th Lancers, and Driver Pte. Keenan, who met their deaths in an ambush at Scramogue, near Strokestown, were wilfully murdered by some person or persons unknown, according to the finding of a military court in lieu of an inquest.

According to a report issued by Dublin Castle, a soldier stated that at a bend in the road the patrol was fired on from a house. The driver was hit, and shut off his engine, and the car soon stopped. Capt. Peek, another officer, and witness got out of the car.

“As I was busy firing my machine gun,” continued the witness, “and was wounded in the arm and face, I did not see much more. Shortly after I heard voices from the houses ordering two R.I.C. constables who were with us to go into the house from which the fire had been directed. Civilians came out of the house, poured petrol on our car and set fire to it. There were about 40 men altogether, and some wore Sam Browne belts. One of these men ordered some of the attackers to hurry up and go back to Strokestown.

Another witness said he saw Capt. Peek run towards a wall and then fall. Witness was hit twice, and his rifle was hit twice in his hand. As he was lying wounded on the road he saw another officer, Lieut. Tennant, standing in some bushes. He was fired on and fell.

Evidence was given by an army doctor that he found a large gaping wound on the left side of Keenan’s abdomen, and his intestines were protruding. Death was due to shock, caused, in his opinion, by either an explosive bullet or a bomb.

A doctor said one of the wounds on Lt. Tennant’s breast was so large that it would admit four fingers. 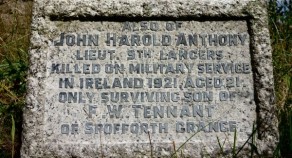