John Percival was the son of John and Mary Percival, née Park. John, senior, was born in Aberdeenshire, Scotland and Mary at Redmire, Yorkshire. John, senior, married firstly, Elizabeth Tomlinson in 1857 and secondly, Mary Park in 1866.

John was married to Mary Ellen Duckworth in 1894. 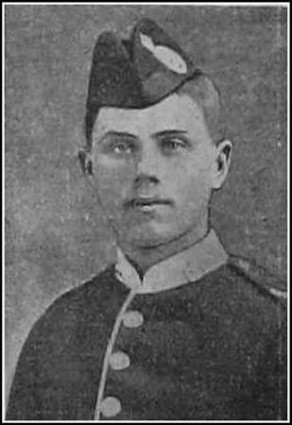 Soldiers who died in the Great War states that he was born in Skipton, and he enlisted at Keighley, dying of wounds.

No service record appears to have survived, but on his medal index card it states that his service record number was 3/11177 and that he embarked for France on 30th November 1914. He was awarded the 1914/1915 Star, the Victory Medal and the British War medal.

In the Keighley News dated April 10th 1915, there is a short article that reads
“A Keighley Soldier killed.
Mrs Percival, of 28, Burlington Street, Keighley, has received word that her husband, Private John Percival, of the 2nd Battalion West Riding Regiment, died on March 24 from wounds received in action. Percival was formerly employed by Messrs. Holmes, Pearson and Midgley, wringing machine makers, Goulbourne Street, Keighley. He was 45 years of age and leaves a widow and six children.”

The ‘action’ where he received his fatal wounds was probably the battle at Neuve Chappelle, which had taken place earlier in the month.

1911 census – John Percival is listed as residing at 28, Burlington Street, Keighley, with his wife Mary Ellen and family, 5 children at home including a daughter listed as Mary Duckworth (wife’s maiden name). This may be a step-daughter. The census also records that John and Mary Ellen have been married for 17 years and have had 9 children, but 3 have died.
His occupation is described as a furnace tenter at a wringing machine (works). He states that he was born in Middleham, Yorkshire.

1901 census – John was also residing at 85, Burlington Street, Keighley at the time this census was taken. He is there with his wife Mary Ellen, Mary Duckworth, again listed as a daughter, and 3 other children. His place of birth is again stated to be Middleham, Yorkshire.

I have not been able to find John so far on the 1891 census, but he married Mary Ellen Duckworth in the Keighley area in 1894.
The Skipton connection
The extract found in the Craven Herald states that John was formerly of Skipton and had many relatives still in the town.

The Percivals seem to have moved to Skipton in the mid 1870s.
On the 1881 census, a head of household is given as a Margaret Percival, aged 18 living with her brothers William (17) and John (12), and sisters Alice (15) and Ann E aged 9. Margaret and Alice stated that they were born in Carperby, Ann E was born in Preston, and William in Redmire and John in Newhouse. These are all places near to Leyburn and Middleham.

The 1871 census shows the head of the family to be Mary Percival, a widow of 30 (her husband John had died sometime in the first three months of 1871), and the family at that point were living in Preston near Leyburn. John is listed as born in Preston and his birth was registered in the September quarter of 1869 at Leyburn.

Although this information about John does not exactly match the details he gives in later censuses, I think it is consistent with someone who does not live in the area where he was born, and when asked for his place of birth, has stated the nearest large town to the village.

Ann Etta Percival was born in 1873, after her father had died, but on her marriage certificate to William Cleaver in 1900 at Skipton Christchurch, she had given her father’s name as John Percival a farmer.
My interest in the Percival family stems from this marriage; William Cleaver was a brother of my great grandfather.
This family settled in Skipton and some descendants still live there now.

Other Percivals
Mary Percival, the mother of some of the children (John’s second wife), remarried a William Clark in 1876 but died in 1880 in the Skipton area aged 39.
Margaret Percival married Robert Rowley, and they remained in Skipton, living next door to William and Ann Etta Cleaver.
Alice Percival married William Unwin and remained in Skipton.
An older brother Frederick Percival, also settled and married in Skipton.
The eldest brother listed on the 1871 census, Joseph, appears to have married and settled in Brierfield near Burnley.

OLD SKIPTONIAN KILLED AT THE FRONT

Though it has not been officially confirmed, the relatives of Pte. John Percival of the 2nd Duke of Wellington’s West Riding Regiment have every reason to believe that he has been killed at the Front. His wife has received letters from several comrades at the Front saying that he was killed by a bullet. Pte. Percival lived at Keighley, but was an old Skiptonian, and has numerous relatives here. He was in the Army many years ago, but owing to an accident to one of his fingers was discharged. About six weeks prior to the commencement of the war, however, he suffered another injury to the same finger, and as a result had to have it amputated. On the outbreak of hostilities he again presented himself for enlistment, was accepted and went with his old regiment into training somewhere on the Northumberland coast. He went abroad just before Christmas. According to the letters received from comrades, who presumably saw him shot, it happened on March 24th at Neuve Chapelle. Percival, who leaves a wife and seven children, was 45 years of age.

It has now been officially confirmed that Private John Percival (whose photograph we reproduce above) of the 2nd Duke of Wellington’s West Riding Regiment has been killed at the Front. A short time ago his wife received letters from several of her husband’s comrades saying he had been killed, but the official notice of his death from the War Office was received on Thursday afternoon week. Pte. Percival resided Keighley, but was an old Skiptonian, and has numerous relatives in the town. As stated last week, he was in the Army many years ago, but owing to an accident to one of his fingers was discharged. About six weeks prior to the commencement of the war, however, he suffered another injury to the same finger, and as a result had to have it amputated. On the outbreak of hostilities he again presented himself for enlistment, was accepted and went with his old regiment into training somewhere on the Northumberland coast. He went abroad just before Christmas, and it is thought that he was killed on March 24th at Neuve Chapelle. Percival, who leaves a wife and seven children, was 45 years of age.

Pte. John Percival, 2nd Duke of Wellington’s West Riding Regiment, killed at Neuve Chapelle on March 24th. A native of Skipton, he was 45 years of age and left a widow and seven children. Resided at Keighley prior to enlisting.