John William Beasley was the son of John William and Amelia Beasley, née Jarvis. John, senior, was born at Ketton, Rutland and Amelia at Wimbish, Essex. 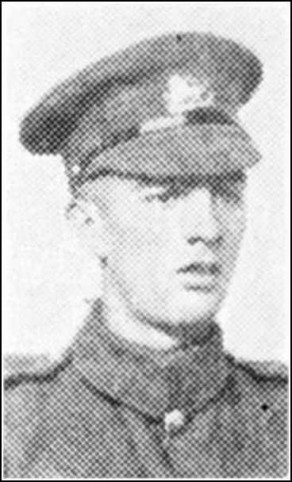 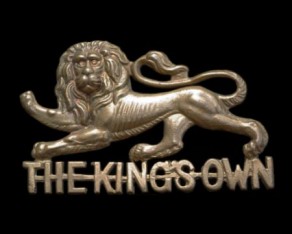 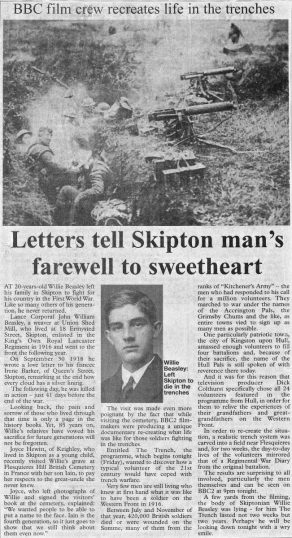 Lance-Corporal John Wm. Beasley, King's Own-Royal Lancaster Regiment, son of Mr. and Mrs. J. W. Beasley, of 18 Ermysted Street, Skipton, was killed in action on October 1st, aged twenty years. Believed to be one of the tallest Skiptonians in the Army (he was 6 ft. 3 ins. in height), he enlisted in October, 1916, and went to France in August, 1917, and had previously been gassed. In civil life he was a Weaver for Mr. Midgley, Union Shed, Skipton, and a member of the Skipton Baptist Church. His brother, Lance-Corporal Charles Edward Beasley, is a Lewis Gun instructor.

Upright and just in all his ways,
Faithful and true to the end of his days;
Forgotten by some - to the world he may be,
But true to our memory he ever will be.
'Tis sad, but true, we don't know why
The best are the first that are called to die.

Dearer to us than words can tell
Are our thoughts of him we loved so well;
'Tis only those who have loved and lost
Who can now realise war's bitter cost.

From Irene and Family, 10 Queen Street.

BEASLEY - In ever loving memory of Lance-Corporal J. W. Beasley, who fell in action October 1st, 1918.

Two years have passed, but not forgot
By those who loved you well;
Your memory is as dear today
As in the hour you fell.

A better son never lived,
Nor one so kind and true;
Worthy of everlasting love
From those he left behind.

Time changes all things,
But remembrance lives for ever.

Official information was received on Friday last that Lance-Corpl. John Wm. Beasley, of the King's Own Royal Lancaster Regiment, son of Mr. and Mrs. J.W. Beasley, of 18, Ermysted Street, Skipton, was killed in action on Oct. 1st. Lance-Corpl. Beasley, who was 20 years of age, enlisted in October, 1916, and went out to France in August, 1917. He had previously been slightly gassed. He was a member of the Skipton Baptist Church, and was formerly employed as a weaver by Mr. Midgley, manufacturer, Union Shed, Skipton. Mr. and Mrs. Beasley have another son, Lance-Corpl. Charles Edward Beasley serving, and is at present acting as a Lewis gun instructor.