Laurence Sylvester Robinson Scott was the son of John and Emily Scott, née Hutchings. John was born at Skipton, Yorkshire and Emily at Farington, Lancashire.

Additional Information: Son of John and Emily Scott, of Ilkley. 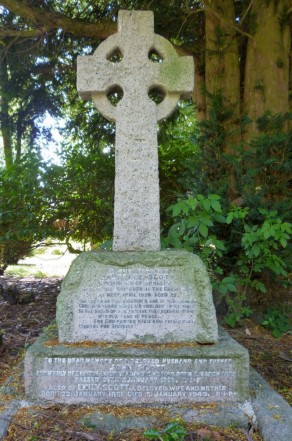 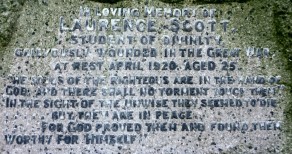 A distressing tragedy was discovered on Wednesday at Ilkley, when a young student named Lawrence S. R. Scott (25), of 7 West View, Wells Road, Ilkley, was found at his residence hanging from a ring fixed to the skylight frame. The inquest took place yesterday before Mr. Edgar Wood, coroner, Skipton.

John Christopher Scott, brother of the deceased, said that since his demobilisation in February 1919, the deceased had been at college studying for Holy Orders. He had spent the last fortnight at home on account of the Easter vacation, and since then he had appeared to be depressed. On March 31st he appeared before a Medical Board, and was advised, owing to his condition, to relinquish his studies for a couple of months and to get into the open air as much as possible. On Wednesday afternoon, as deceased did not appear at the tea-table, witness went in search of him, and found him in the attic hanging from a ring fixed to the skylight. Dr. Gibson was immediately summoned.

Dr. Gibson said he saw the deceased on Saturday last and came to the conclusion that the deceased was suffering from depression. Witness understood he had been wounded in the head, and witness thought that fact had a lot to do with the depression. He exhibited no suicidal tendency on that day, but was worrying at having to relinquish his studies. On his (witness’s) arrival on Wednesday deceased was quite dead. In his opinion his mind was unhinged owing entirely to the wounds received during the war.

A verdict of “Suicide whilst of unsound mind, brought on by wounds to the head received during the war” was returned.

Mr. Scott was the younger son of Mr. and Mrs. John Scott, of 7 West View, Ilkley, and formerly of Croft House, Skipton. He joined the 9th Battalion West Riding Regiment in the first month of the war, and went to France in the summer of 1915. He was severely wounded in the attack on the Bluff, near Hooge, in March 1916. After partial recovery he was marked for permanent home service, but volunteered again for the line. Consequently he was posted to the 1/6th Battalion W. R. Regiment, with which he served from June, 1917, until after the Passchendaele offensive in November, 1917, when he was again invalided home and marked for home service. Once again he volunteered for France and joined the 2nd Battalion W. R. Regiment in January, 1918. He was wounded a third time near Hinges (north of Bethune) on the first day of the final Allied offensive – July 18th, 1918, and was finally discharged as unfit in February, 1919.

He had since that time been at Durham University reading for Holy Orders. He was a keen rugby player, and represented his University against Edinburgh University last term. Throughout the war he persistently refused to take a commission, as he considered that his experience in the ranks would be of great value in his chosen calling.

FUNERAL OF THE LATE MR. LAWRENCE SCOTT – VICAR’S TRIBUTE TO A HEROIC LIFE

The remains of the late Mr. Lawrence Scott, of West View, Ilkley, whose death took place on Wednesday last week, were laid to rest at the Ilkley Cemetery on Friday last. The coffin was covered with the ‘Union Jack,’ and on it were his military cap and three special wreaths – (1) from the family; (2) from the 9th Duke of Wellington’s Regiment – “To their old comrade”; and (3) from the servers, past and present, of St. Margaret’s. The bearers were six of his staunch comrades, ex-service men of the 9th Duke of Wellington’s Regiment. The blinds at most of the shops and places of business were lowered as the cortege passed through the town.

On arriving at the church the body was placed in the chancel facing the altar. The service was conducted by the Rev. H. J. Glennie (vicar), assisted by the Rev. F. Feetham (curate), who wore his military stoll, as a chaplain to the forces. The chief mourners were Mr. and Mrs. John Scott, the Misses Scott (sisters), Mr. J. C. Scott (brother), Mr. and Mrs. William Scott (uncle and aunt), Miss Alison Scott, and Mr. William Scott, jun. (cousins). There was a large congregation, including a large contingent from the deceased’s old battalion, and Mr. Vincent Taylor (his tutor), Mrs. Taylor, Mr. B. Dawe (an undergraduate friend), and Mr. and Mrs. William Procter (late of Rylstone). The hymns, ‘Jesu, lover of my soul,’ and (as the procession left the church) the ‘Nunc Dimittis,’ were sung. The service at the graveside was conducted by the Rev. H. J. Glennie.

Preaching at St. Margaret’s, Ilkley, on Sunday evening the Vicar, the Rev. J. H. Glennie said:–“ We of this Church of St. Margaret’s have had our Easter joy overclouded by a sad and distressing tragedy. There knelt with us at God’s Altar last Sunday morning one who held a fine record of loyal and devoted service to his King and country, as well as of a singularly pure, clean and unselfish life. Few men served their country more heroically in the late war than did Lawrence Scott, one of the servers of this church. Frequently disabled by wounds, he returned again and again to his post, though he might have claimed exemption from further service had he wished it. Returning to civil life with shattered nerves and barely healed wounds, he set himself at once to fulfil the one great desire of his life, to offer himself for Holy Orders. The mental strain of brain work broke him down, and he took his own life. To all who knew him, and loved his simple, genuine and selfless life and character the verdict upon that act is that “he died of his wounds.” We followed him to the grave from this church with our affectionate prayers, and our sincere sorrow and sympathy for those near and dear to him, and we commend him to the loving mercy of the God whom he loved and served all through a pure and blameless life. – May he rest in peace!”

On Sunday, June 28th, a memorial tablet to Mr. Lawrence Scott was unveiled in the chapel of University College, Durham, at evensong. This tablet was erected by his fellow students at Durham University. The dedication ceremony was performed by the Rev. A. E. Ellershaw, master of University College, and the actual unveiling by Messrs. Dawe and Yeoman, two especial friends of Mr. Scott, and the organisers of the memorial. In his sermon the Rev. A. E. Ellershaw said:–

“I wish to speak of Laurence Scott in no exaggerated terms, and certainly with no sentimental feelings, but just as I knew him. In him, I think, dwelt the same spirit that animated the Good Samaritan. He was honest, true hearted, of an almost childlike transparency of nature, and, had it been permitted, would have become a faithful minister of Christ’s Church. And it would have been just these kindly neighbourly qualities of the Samaritan which would have enabled him to make his mark. In that respect indeed, he, being dead, yet speaketh to us who are left, so much poorer by his absence.

The special hymns were:– ‘O God our help in ages past,’ ‘On the Resurrection Morning,’ ‘Let Saints on Earth,’ and ‘Jesu, lover of my soul.’

Mr. John Scott, the father of the deceased (a well-known and highly respected Skiptonian), was present at the service.