A short biography of Michael is included in: ‘Swaledale & Wharfedale Remembered - Aspects of Dales’ life through peace and war’ by Keith Taylor (2006). 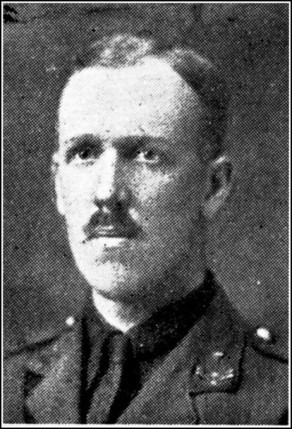 Michael Maude joined his elder brother at the School House in 1904 and left in 1908. Being on the Special Reserve of Officers he was one of those who went out first in 1914 with the 2nd Yorkshires, and took part in all the activities of the 7th Division which covered the retreat from Antwerp. After this which was perhaps the most severe fighting of the war, he was invalided to England for a rest. Having recovered he went out again and was attached to one of the service battalions of his regiment. He was wounded when gallantly leading his men into action on Sept. 20. After a while he was brought to England but died of wounds at Dover on October 14th.

From the many tributes to his memory by his brother officers we are allowed to quote a few extracts. “He was quite the best company commander I ever worked under.” “As a friend he was at all times charming.” “The men of his company thought the world of him.” “He had a very strong sense of duty.” “He was such a good sportsman.” In these scraps we get some idea of what he was out in France. He went as naturally to fulfil his duties as a soldier as he had carried out his duties as a citizen, and left his farming and his home, without hesitation, to do his share of defending his country. He served through the severest fighting and after a rest went back to do his all. His family’s loss is shared by all who knew him here, and appreciated his thoroughly honest, straightforward character. 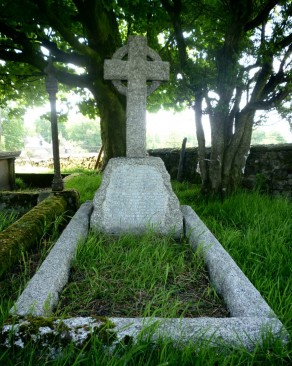 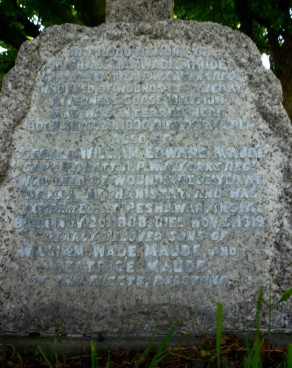 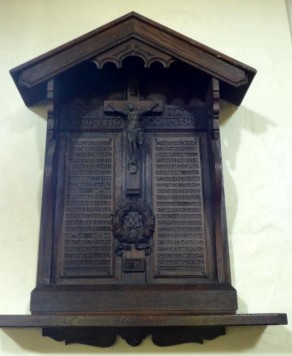 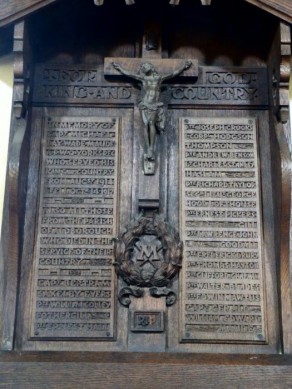 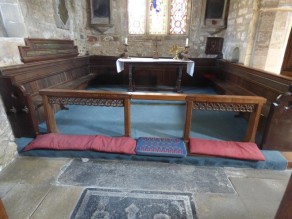 Aldborough Parish Board and Pew

Aldborough Parish Board and Pew - detail

Lieut. Michael Maude, of 2nd Battalion the Yorkshire Regiment ‘Green Howards,’ has been granted leave of absence after temporary sickness and has returned to his home at Ellenthorpe, Boroughbridge, for a short rest. He left England with his regiment on October 5th and since then has been continuously at the front in Belgium. To give some idea of the hard fighting the regiment has had to do, it may be mentioned that they were in the trenches for 21 consecutive days without a rest.

Captain Michael Day Wade Maude, Yorkshire Regiment, of Ellinthorpe Hall, Boroughbridge, younger son of Lieut.-Col. and Mrs. Maude, The Fleets, Rylstone-in-Craven, is reported admitted into hospital in France, suffering from severe shrapnel wounds in the thigh. Captain Maude went out to France in 1914 with the Seventh Division, and was in the first battle of Ypres. He was mentioned in despatches after the battle of the Somme.

It is with deep regret that we announce the death of Captain Michael Day Wade Maude, younger son of Lieutenant-Colonel and Mrs. Maude, The Fleets, Rylstone-in-Craven, from wounds received in action. The sad event occurred in a military hospital at Dover. As previously reported in our columns, Captain Maude was severely wounded in the thigh with shrapnel a month ago, and after treatment in France he was brought over to this country, and death occurred on Sunday.

Captain Maude, whose home was at Ellinthorp Hall, Boroughbridge, went to France in 1914 with the Seventh Division, and he was in the first battle of Ypres. He was mentioned in despatches after the Battle of the Somme. He was born on St. Michael’s Day, 1890, and was thus 27 years of age. He was attached to the A.P.W. Yorkshire Regiment (Special Reserve). The remains will be interred with military honours at Aldborough, Boroughbridge, today (Friday).

We tender to Colonel and Mrs. Maude, on behalf of their many friends in Craven, our sincere sympathy.

CRAVEN AND THE WAR – THE LATE CAPTAIN MAUDE

Amidst impressive scenes the funeral took place on Friday, October 19th 1917, at Aldborough, Boroughbridge, of Captain Michael Day Wade Maude (Alexandra, Princess of Wales’ Own, Yorkshire Regiment, Green Howards), of Ellinthorp Hall, Boroughbridge (younger son of Lieutenant-Colonel W.W. Maude and Mrs. Maude, The Fleets, Rylstone-in-Craven), who died of wounds in a south-country hospital on October 14th. Full military honours were accorded to the deceased. The procession from Boroughbridge Station to Aldborough Church was headed by a firing party (with rifles reversed) of men of the Yorkshire Regiment, the band of the Battalion (under Bandmaster Andrews) playing Beethoven’s Funeral March, and the Dead March in ‘Saul’. The coffin, covered with the Union Jack, on which were placed the deceased officer’s sword and cap, was borne on a farm wagon, drawn by a chestnut carthorse. It bore the inscription:– ‘Captain Michael Day Wade Maude, ----- Batt., A.P.W.O. Yorkshire Regiment, died October 14th, 1917, aged 27 years.’

At Aldborough Church, where the first portion of the burial service was held, the hymns ‘For all the Saints who from their labours rest’ and ‘The King of Love my Shepherd is’ were sung, and Chopin’s Funeral March, played on the organ by Miss Hardcastle. At the graveside the hymn ‘Fight the Good Fight’ was sung, and three volleys were fired over the grave, and bugles sounded ‘The Last Post’.

Before proceeding with the ordinary business, the Chairman said he felt that although Colonel Maude was no longer a member of the Board, they ought to offer him and his family their sympathy in the sorrow that had come upon them in the loss of their youngest son. They all felt what a great blow it would be to a man who, although he had his own opinions about matters, was of an affectionate and kindly nature. They must feel that there was a great shadow over his life. He had lost his sight, only for the time being he hoped, and the two blows coming together they would all feel that he needed their sympathy all the more. When he was a member of the Board, Colonel Maude and he did not always see eye to eye, but he had an answer to a letter he wrote to him, and he was thankful to say their old friendship had not in any way been disturbed. Mr. Speak seconded, and said that he agreed with all that the Chairman had said. Mr. Robinson, in supporting the resolution, said he saw Col. Maude recently, and he was then very hopeful that his son would recover. He felt certain that the loss he had sustained would come to him as a great blow. He was deserving of all their sympathy, and he was sure he had it.

The resolution was carried by the members rising in their places.

SKIPTON UNION – BOARD OF GUARDIANS

Colonel Maude wrote tendering his sincere thanks to the Board for their kind expressions of sympathy with Mrs. Maude and himself in their sad bereavement. The Craven district seemed to have been hit very hard lately, and so many connected with the Board had lost their dear ones, and was grieved to note how week by week the toll increased.

The will has been proved of Captain Michael Day Wade Maude, Yorkshire Regiment, of Ellinthorp Hall, Boroughbridge, who died of wounds at a Military hospital on October 14th last, youngest son of Colonel W. W. Maude, of The Fleets, Rylstone, Skipton. The gross value of the estate is sworn at £6,321.

Yorkshire Regiment, younger son of Lieutenant-Colonel and Mrs. W. W. Maude, The Fleets, Rylstone, died in hospital at Dover from wounds October 14th, 1917, aged 27 years. Mentioned in Despatches after the battle of the Somme.

We regret to announce the death at Peshawar, Punjab, India, on November 5th, of Captain Gerald William Edward Maude, the elder and only surviving son of Lieutenant-Colonel W. W. and Mrs. Maude, The Fleets, Rylstone-in-Craven. Captain Maude had served eight years in India with his regiment, the 1st Battalion, A.P.W.O., Yorkshire Regiment (Green Howards), and last spring he was badly wounded by a bullet penetrating one of his lungs near Fort Dekka in Baluchistan. After three months sick leave in Kashmir, he recovered sufficiently to resume duty. On being granted a year’s leave he was hoping to embark for England on November 7th, but unfortunately he contracted a cold, which probably affected the injured lung. Pneumonia developed, and Captain Maude died on November 5th at the Military Hospital, Peshawar. He leaves a widow and one little son, and was 30 years of age.

It will be remembered that Colonel Maude’s youngest son, Captain Michael Day Wade Maude, died in the Military Hospital, Dover, on October 14th, 1917, from wounds received in action, Captain M. Maude was severely wounded in the thigh with shrapnel, and after treatment in France he was brought over to this country. His home was at Ellenthorpe Hall, Boroughbridge, where he was interred on October 19th, 1917. Capt M. Maude went to France in 1914, with the seventh division, and he was in the first Battle of Ypres and was also mentioned in despatches after the Battle of the Somme. He was born on St. Michael’s Day, 1890, and was therefore 27 years of age. He was attached to the A.P.W. Yorkshire Regiment (special reserve).

We extend our sincere sympathy to Lieut.-Colonel and Mrs. Maude in their second bereavement.

Captain Michael D.W. Maude, Yorkshire Regiment, younger son of Lieutenant-Colonel and Mrs. Maude, The Fleets, Rylstone, has been severely wounded in the thigh with shrapnel. Captain Maude, whose home is at Ellinthorpe Hall, Boroughbridge, went to France in 1914, and he was in the first battle of Ypres. He was mentioned in despatches after the battle of the Somme.

Captain Michael Day Wade Maude, younger son of Lieutenant-Colonel and Mrs. Maude, The Fleets, Rylstone, has died of wounds in a military hospital at Dover. As previously reported, Captain Maude was severely wounded in thigh with shrapnel a month ago, and after treatment in France he was brought over to this country, and death occurred on Sunday, Captain Maude, whose home was at Ellenthorpe Hall, Boroughbridge, went to France in 1914 with the Seventh Division, and he was in the first battle of Ypres. He was mentioned in despatches after the battle of the Somme.