Robinson Lancaster Halstead was the son of Thomas and Bridget Halstead, née Courtney and brother of Private Richard Halstead (10845) (q.v.). A third brother, Private Tom Halstead, 3057, 1/5th Bn East Lancashire Regiment, was killed in action on the 1 September 1915. Their father was born at Haslingden, Lancashire and mother at Dublin, Ireland.

The British Army Service Record for Robinson Lancaster Halstead exists but may be incomplete. (The record, at one point, states that Robinson’s unit was the 30th Divisional Train attached to the 110th Engineer Regiment of the 35th American Division when he died. The unit, 30th Divisional Train (as was originally stated in ‘Main CPGW Record’), has now been changed to the 8th Reserve Park, Mechanical Transport. See: Observations - Robinson Lancaster Halstead by Ian Cameron in ‘View Additional Text’ below.) 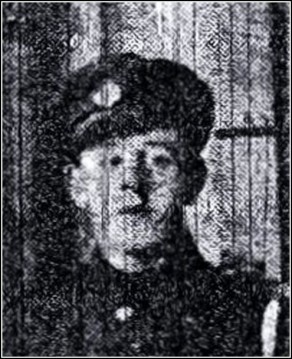 Mrs. Halstead, of 9 Barley Holme, Crawshawbooth, received official notification on Thursday of the death of her husband, Private Robinson Halstead, which occurred from a fractured skull at the 16th General Hospital, Le Treport, on 5th June.

Pte. Halstead was the son of Mrs. Halstead of Goodshawfold, who has now lost three sons in the great war, besides another son having lost his leg. Her remaining son joined the colours only a few weeks ago. The deepest sympathy is expressed with the family in their sorrow. Pte. Halstead was in his 24th year, and leaves one child.

Driver Robinson Lancaster Halstead, of 6, Barley Holme, Crawshawbooth, as reported in last Saturday’s “Free Press” died from a fractured skull in France. He was a member of St. James-the-Less Church, and leave a wife and child.

The Government introduced the Military Service Act on 27 Jan 16 and all voluntary enlistment was stopped from this date. All British males were now deemed to have enlisted on 2 Mar 16 - that is, they were conscripted if they were aged between 19 and 41 and resided in Great Britain (excluding Ireland) and were unmarried or a widower on 2 Nov 15. This act was extended to married men, and the lower age dropped to 18 on 25 May 16. In May 16 Robinson Halstead, a married man with a young son, was called up for service After Attestation and initial Medical he was identified as a Private in the King’s (Liverpool Regiment) and sent home to await re-call. In Oct 16 he was re-called. Long gaps such as this were not unusual and even though he was at home awaiting re-call this was counted as actual Service. We are told (St James Project) that “in January 1917 Robinson was transferred to the Army Service Corps Mechanical Transport Division and, as a driver, was posted to France in October” This is curious as Robinson is T/294466 and ASC soldiers enlisted in Horse Transport usually had a T/ prefix to their number whilst those in Mechanical Transport an M/ prefix. The largest element of the ASC in the Great War was the Horse Transport section and it may be that some prior experience in this field was later identified that diverted Robinson from service in the King’s (Liverpool Regiment) post enlistment. Most Horse Transport Companies were under orders of Divisions, with four normally being grouped into a Divisional Train. The Craven Project identifies Robinson Halstead as part of 30 Divisional Train ASC but honestly and openly admits “The details on each soldier have also been further fleshed out by showing the regimental (Divisional) badge he would have been wearing at the time of his death” I would offer that the MIC and CWGC Records references to 8th Reserve Park, Mechanical Transport possibly contradicts this connection. Other ASC sub units were part of the Lines of Communication where they were variously known by subtitles as Auxiliary Supply Companies or Reserve Parks. Reserve Park Companies were a transport element in the lines of communication in the deep rear behind the battle fronts, notably in handling the rations and forage for a division. Robinson Halstead is recorded on MIC and CWGC Records as being in 8th Reserve Park, Mechanical Transport at the time of his death. However there is no known 8th Reserve Park, Mechanical Transport but there is an 8th Reserve Park, Horse Transport, eventually based on 88 Company ASC that spent the whole war in the Rouen area. I would therefore offer the following as a third option: The reference to “ASC MT 8 Res Pk” on his Casualty Telegram may actually refer to ASC HT 8 Res Pk” (an actual unit) and this possibly incorrect “seed data” was expanded to “Mechanical Transport” in the 1920’s CWGC Records and MIC (in turn extracted from Medal Rolls) Furthermore there is a strong geographical connection developing: ASC HT 8 Reserve Park at Rouen and 16 General Hospital Le Treport are along Lines of Communication routes connecting the ASC Base Depots of Le Havre, Dieppe and Rouen - to name but three and within a 50 mile radius. Another curiosity is the specific reference in the St James Project to “On 4th June 1918 Robinson was attached to the 35th American Division and transporting weapons for front line troops when his vehicle crashed” which is unfortunately not referenced. The many elements of the 35th (US) Infantry Division (Santa Fe Division) had arrived at Le Havre on 10 May 18 and by 13 May 18 had moved out to the British sector in Northern France for further training some three weeks before Robinson Halstead’s death. It then moved on to serve, a brigade at a time, in the French sector (Vosges) between 30 Jun 18 and 13 Aug 18 several weeks after Robinson’s death. This merits further investigation as the arrival of the American Expeditionary Force coincided with issues of British Arms and Equipment and again the connection is very plausible but suggests Seine-Maritime once more although it seems unlikely to have been specifically the Santa Fe Division that late. Another interesting point regarding Robinson Halstead is No 16 General Hospital where he died. Several sources (notably “LOCATION OF HOSPITALS AND CASUALTY CLEARING STATIONS IN THE GREAT WAR” Ministry of Pensions to the British Red Cross Society Records Office dated 13 July 1923) will state that this hospital had been “taken over by the American Army June 1917” This is true but misleading. US Base Hospital No 10 was organized at Pennsylvania Hospital, Philadelphia and was one of the original six US hospitals assigned to duty with the British. It operated No 16 General Hospital (and remained attached to the British) from 12 June 1917 until February 1919. Robinson Halstead was not treated in a US Hospital he was treated in a British Hospital run by US medical staff.